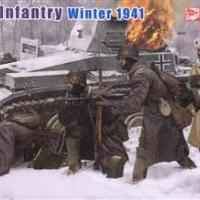 When Germany invaded the Soviet Union in June of 1941, Hitler expected the whole country to fold quickly after the magnificent show of force of the German War Machine. But it was the Russian winter that slowed the German advance and forced them to go on the defensive. Unable to capture key cities like Mosow and Leningrad, and clad in their summer uniforms, the Germans faltered as the Soviets took the offensive, and served up Hitler’s first major defeat.

The four figures in this kit represent the lowly Soviet groundpounders who helped stop the enemy advance that winter of 1941, all appropriately clad in winter clothing in natural poses. There is an officer in a warm sheepskin coat and officer’s grade fur cap. He rams home a fresh magazine into his Tokarev pistol. The three enlisted men wear the long greatcoat with wool balaclavas under their M40 steel helmets. To complete their winter wardrobes, all four men have thick felt overboots called valenki. The standing enlisted man carries a Degtyarev DP light machine gun. The kneeling man is his assistant, he holds a dish shaped magazine in readiness, and carries the accessory and cleaning kit with spare barrels and tools in the large bag on his right hip. Both he and the crawling man are armed with Moisin-Nagant 1891/30 rifles, the standard Soviet rifle of the war. The enlisted men all carry the early style gas mask bag on their left hip, and the 1941 back pack, which was basically just a bag that tied on the top.

Upon opening the box, you will find five sprues with 114 pieces of flash free grey plastic. Detail is good, but some parts will require extra work. The weapons are excellent Gen 2 quality pieces, and four extra helmets are also included.

I start with the lower halves, gluing the legs together after cleaning up the mold seams. These figures have long overcoats and the skirts to the coat consist of at least four parts. There will be gaps to fill and I use Tamiya putty for this. Then I glue on the torso. At this point, I add ammo pouches or gear that may be difficult to add once the arms are attached. Often I have to file or carve notches into the back of the gear to get the parts to fit well. I use tube glue for its filling qualities, I do not want to see space behind the gear when I start painting. I had to do much filing and sanding on the backpacks to get them to fit closely to the men’s backs. The officer has a part, D16, which drapes over his right arm. These are … I don’t know, mittens? But the officer already has gloves on, so I left this mystery piece off.

A few notes about the gear – Not all Russian soldiers were issued two ammo pouches, some only had one. I left one off the kneeling man, and added part 5, which I believe is a grenade pouch. There are two bayonet scabbards in the kit, one with a very poorly defined socket bayonet still in it. Bayonet scabbards were very rarely issued, the soldier was expected to carry his bayonet on his rifle. I did not use either scabbard. Part B14 is supposed to represent a bayonet to mount on the kneeling man’s rifle. This part looks like a thick iron bar, and should not be used. Since the figures are in an offensive mode, they surely would have their bayonets mounted on the rifles. To make reasonably accurate ones, I used a piece from the weapons sprue. Dragon includes four extra helmets with the weapons, and next to these is a section of sprue that is flat on one side. I stretched this and it held its shape. I cut two pieces the same length as the scabbard, and gave them somewhat of a tapered point with careful sanding. I glued a small spacer on the right side of each rifle barrel and added the blade. They came out quite nice, not 100% accurate but way better than part B14.

The kit helmets are not as accurate as the extra helmets, the helmet for the kneeling man has the chinstrap on the brim, a nice touch, but mine just looked like a blob. The extra helmets are much better defined and fit the standing and kneeling figures nicely, so I used them. The nicer helmet won’t fit on the crawling figure, and even with the smaller helmet, you will have to carve away some of the backpack on him to get the helmet to fit. To portray early war figures, it would have been better to include the model 36 helmet, which had a dome on the top, or even the Budionovka pointed felt cap, both more common early in the war. Many Soviet soldiers felt it was “unmanly” to wear helmets, so warm caps would make more sense. At any rate, I leave off the headgear until the faces are painted.

You will also find some extra weapons included. A nicely done PPSh with drum magazine and two excellent PPS-42 submachine guns, one with extended stock. The PPS-42’s are probably the nicest I’ve seen in this scale, and will require care in removing from the sprue.

Included are four ammunition carriers for the disc magazines. They are metal with a rounded bottom. I have seen canvas carriers for the magazines, but I looked all over for a picture of these in use and couldn’t find one. They are very similar to other Soviet ammo cans of the period, which had a folding lid and presumably a canvas carrying handle on the top. Of the four ammo cans, two are closed and two open, the lid is a separate part, no. 8. I glued a strip of paper to the top to serve as a handle. I only will use one of the open ammo cans with the figures, but the extras, as well as the extra weapons, will find their way to other models.

I started with a shot of Testors White Primer. After looking over the figures for any flaws, I painted the faces first, Testors Tan mixed with white. The balaclavas and gloves came next, in a variety of grays. The officer has dark brown leather gloves. The box has color call-outs for Mr. Color and Model Master paint, but I seldom use these guides. I prefer to find good color photos in a book or on the web. My main reference for these figures was Fighting Men of World War II – Allied Forces, by David Miller. Between the book and box art, you will get a good idea what the uniforms should look like. The overcoats are gray, with a distinct brownish tinge, which I made by mixing black and white, and Model Master Leather.

Two colors I used a lot are Model Master 1735 Wood and 2054 Earth. I mixed these colors for the trousers, and using the same colors with white and olive drab, painted the gas mask bags, canteens, field packs and all the straps, as well as the felt overboots. Leather belts, ammo pouches and officer’s gear would be various shades of brown. The rifle stocks would be a reddish brown. The only insignia visible is the star on the officer’s fur cap, which can be olive drab or red, and the lozenge shaped patches on the overcoat collars, which would be a wine red for infantry

I used paper strips for the rifle slings. I had once owned one of these Moisin rifles, and instead of metal swivels for the slings, it had leather straps through the stock. I glued small strips of paper to the ends of the slings, and bent these up, gluing them to the stock. The slings would be a tan leather color.

These figures will go well in a winter scene, maybe alongside an attacking Soviet tank or a knocked out German vehicle. They don’t necessarily have to represent figures in 1941, since the overcoats were worn throughout the war, and can be combined with other Russian infantry figures in the white snowsuit or quilted khaki jacket, to show the hodge-podge of uniforms often worn in the same unit.

Thanks to Dragon for another great figure set, and for this review kit, and thanks also to IPMS/USA for the opportunity to review this model.

Box back - Painting Instructions
Previous Next