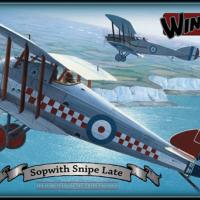 This is without a doubt the best aircraft kit I have ever built. Wingnut Wings has produced an absolute wonder of a kit in this Sopwith Snipe.

Upon opening the sturdy box, one finds six grey sprues, one clear sprue, and a photo etch fret. In addition, there is a very colorful and complete 23-page book of instructions with color photos and actual WW I photos of several Snipes.

To begin, I assembled the cockpit which consists of over 30 parts, not counting the rigging wires. When complete, this is a real gem that should really be displayed alone. It is a shame that it has to be shut up inside the fuselage as not much can be seen once installed. I hope that Wingnut Wings will produce kits of just their cockpits. The instructions for the cockpit are color drawings and color photos of the real cockpit. Can’t beat that.

Next came the 13-piece engine. This also is a real beauty.

After the cockpit and engine are finished, the interior of the fuselage is painted and the cockpit and cowling are installed. This closes up the interior. The bottom wing came next. Remember to drill out the holes for the rigging. I then installed the engine to the front but left the prop off for the end.

I glued the struts to the bottom wing using Elmer’s white glue in case I had to move them a bit. Since I’ve had bad luck rigging other bi-planes in the past, once the bottom wing was installed, I thought I would try something different by gluing the rigging in place before putting on the top wing. I tried EZ Line but found that it was too thin and flimsy and was difficult to get to stick. I then tries something called Stretch Magic that I got in the jewelry-making department of Hobby Lobby. Again, this was a flop.

My final solution was to use .0065 stainless steel wire which I glued with Elmer’s white glue. This was a job for trial and error, as each of the over 75 pieces of rigging had to be test-fitted before installing. Very time consuming job. Installing the top wing was a challenge, as I had to push the struts into place and then CA glue them. I wasn’t happy with that result.

I forgot to mention that decaling should be done before doing the rigging.

The decals were great, very thin and conforming nicely with Micro Sol. Keep them wet as they have a tendency to stick and not move upon contact.

I spray painted the major components with my standard Duplicolor Light Grey auto primer and then painted them with Tamiya Gloss Aluminium lacquer.

The finished kit looks terrific. I just loved building this kit and look forward to doing another Wingnut Wings kit, but one with less rigging. I feel that these are the best aircraft kits on the market and a bargain at $69.00. It took a little more time than I expected due to the trial and error of the rigging. I would highly recommend this and all Wingnut Wings kits for modelers with some building experience under their, er, wings.

I wish to thank Wingnut Wings and IPMS-USA for providing this fine kit to review.