Small Arms for the Volkssturm Set 1 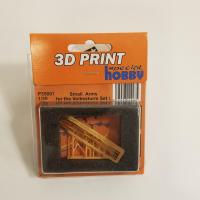 The set is part of a new line of 3D printed 1/35 scale accessories. The kit contains one instruction sheet, photo etched straps and a one 3D printed part with four weapons on supports.

To begin, I primed the weapons using Tamiya Fine Surface Primer while they were still on the supports. Next, I air brushed them with a base coat using AK Interactive Gunmetal.

I removed the first weapon by cutting the supports at the bottom due to the tight fit and to prevent unnecessary damage to the gun. Once it was free, I then carefully removed the figures see picture 7.

After all the weapons had been removed and trimmed, I completed the painting process. All that remained was to attach the photo etched straps. My one criticism of this set, is that the instructions tell you to loop the straps through the buckles. The illustration also shows the straps looped through fittings on the guns. As far as attaching the straps to the guns, there are no fittings see the stock of the rifle through which to feed the strap.

Overall, this is a very nice accessory set. It has a few issues, which a moderately skilled modeler would be able to overcome. It is also possible that the review sample had a 3D printing deficit.

Thank you to CMK for providing the sample for review, and thank you to IPMS USA for the opportunity.

Thank you Bill & Phil for all you do for the Reviewers!