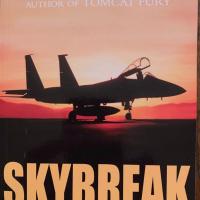 Following Iraq’s invasion of Kuwait in the fall of 1990, the 58th Fighter Squadron was one of the many USAF units deployed in support of Operation Desert Shield – the coalition effort to deter further aggression by Iraq – and eventually Operation Desert Storm, the coalition campaign to forcefully remove Iraqi forces from Kuwait.

Flying the newest version of the F-15C Eagle, the 58th was tasked with protecting coalition aircraft from interference by Iraqi Air Force aircraft. During the air campaign the F-15s of the 58th downed 16 Iraqi aircraft ranging from MiG-29s to Su-22s without a loss.

Based on hours of interviews with several of the pilots and maintenance personnel of the 58th, Skybreak tells the story of the events leading up the air-to-air campaign against the Iraqi Air Force from the viewpoint of the men who flew the missions and maintained the aircraft. It also highlights some of the unexpected issues that had to be recognized and addressed before the air war could even begin, such as building up a supply of external tanks for the F-15s as while each aircraft had deployed with external tanks, air combat doctrine dictates that these be jettisoned prior to initiating air-to-air combat as they degrade the aircraft’s performance. ; The pilots knew that if the Iraqi’s decided to contest the skies, the squadron’s supply of external tanks would be quickly exhausted unless additional tanks were stockpiled in advance.

Guardia also discusses the some of the bigger issues that the strike planners had to address such as the development of a system for deconflicting aircraft by using new methods and equipment to quickly and accurately distinguish between friendly and enemy aircraft to avoid “blue-on-blue” encounters and reduce the risk of accidentally shooting down another coalition aircraft.

Guardia’s style is very readable, and I found the book to be a pretty quick read. There are a few errors in the book which I found a little annoying such as describing how one of the 58th’s pilots spent time aboard one of the Navy aircraft carriers in the region during Desert Shield as part of building an understanding on how to integrate carrier strikes into the coalition plan and watched flight operations from the carrier’s Combat Information Center (CIC). Unfortunately, flight operations cannot be observed from CIC as it is located deep within the carrier, well below the flight deck. I suspect they actually observed flight operations either from Pri-Fly at the top of the island overlooking the flight deck or the catwalks around the island.

As the book is aimed at telling the story of the 58th Fighter Squadron’s participation in Desert Storm, most of the photographs are of the people of the squadron with just few of the unit’s F-15s, so if you are looking for a resource to build a particular F-15, you will need to look elsewhere. On the other hand, if you are looking for a good discussion of the air-to-air campaign, by those who participated in it, this is a good source.

Recommended. Thank you to Magnum Books for the review sample.