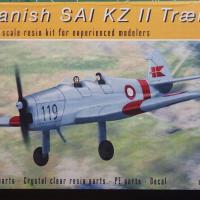 S.B.S. Models is a Hungarian model company best known for producing resin and photo-etch upgrade kits for planes, AFVs, and other military vehicles. They also produce a handful of full resin plane kits in 1/72nd scale. The SAI KZ-II kit is one of their latest resin kit offerings.

Unless you grew up in Denmark in the late 40s to mid-50s, you might not have heard of the Skandinavisk Aero Industri (SAI), or their single-engine, two-seat sport aircraft the SAI KZ II. The KZ II was the second plane built by the Danish company in the mid-1930s, following the appropriately named, KZ I. The first flight of the KZ II took place near the end of 1937, and about a dozen planes were built the following year. This turned out to be unfortunate timing, because upon invading Denmark, Germany seized all the planes which had been built. SAI did not resume plane construction until the end of the war, and as the newly created Danish Air Force needed new pilots, they began looking for appropriate training aircraft. The SAI KZ II proved to be an excellent choice for the Danes, and in 1946, they added 15 two-seater planes to their training fleet. The aircraft remained in service through the mid-50s, and eventually, the remaining planes were sold to private interests and there are still a few air-worthy versions remaining today.

The kit comes in a nicely packaged box with all of the resin pieces packed into a few small re-sealable bags. The resin is light grey, with one piece of clear resin for the two small windscreens for the open cockpits. The kit also provides a small photo etch sheet with details for the instrument panel, seat belts, and cockpit interior. The instrument panel is further enhanced with a small clear plastic film representing the control faces of the instrument panel. The resin shows very nice details, is relatively flash-free, and has very thin connection points to the pour stubs. The original plane was built primarily of wood and fabric, so the fuselage ribbing was visible, and the kit parts accurately reflect this. The engine cowling is especially nice, with excellent details, although the rivets may be a little more pronounced than they were on the real plane. The wings and control surfaces are very nice too, but the real star of this kit is the cockpit. The fuselage interior, combined with the photo-etch, thin seats, and nice instrument details will really stand out with the open cockpit.

The kit instructions are simple and easily understood with nice exploded view drawings showing the assembly in black and white. Full color, four-sided, drawings with clear painting instructions (“Aluminum”, “Yellow”, “Black”, “Red”) are also provided. The kit provides a single decal sheet with markings for three planes, two Danish Air Force trainers, and one civilian plane from the mid-70s. The decals look to be in register, with no visible errors.

The cockpit is very nicely detailed with photo-etch details for the instrument panel and seat belts. The fuselage side walls also contain some nice detailing, the seats are well done with some very nice rivet details and the assembled instrument panels look great. Make sure to take some photos before you close up the fuselage, because this is a very small plane, and in 1/72 scale the cockpit details are mostly tucked away and out of sight, even with open canopies.

The fit of the fuselage was decent, but you’ll need to do some clean up around the top and bottom seams nearly the entire way around. The kit has nice rib details on the fuselage exterior, and although they are very prominent, when compared to images of the real thing, they don’t appear to be overdone. The rudder and horizontal stabilizers fit so well, that I almost didn’t need any glue, and no additional filler was needed. The engine cowling and nose of the plane is provided as one separate piece to attach to the front of the fuselage. It also has some nice rivet detailing and features, and it aligned nearly perfectly with the fuselage.

The wings provide a couple of rounded bumps as guides for fitting the wings to the fuselage. I preferred to drill guide holes and place a small bit of tubing in to provide a better fit and alignment. Similar to the fuselage, I had a seam to fix all the way around the model. The wings have excellent detailed molded into them with flaps, and more structural ribbing visible on the parts. The landing gear is fixed directly to the bottom of the wings, with guides for where to properly place them, and the wheels are nicely detailed.

Honestly, once you complete the cockpit, the kit goes together very quickly. There are a few very small pieces to add near the end of the construction, so pay attention. Luckily for me, SBS was kind enough to provide a couple extras of the really small pieces in case you lose one along the way. The build is very enjoyable, and stress free. Each cockpit has a very small windscreen, which is provided in crystal clear resin and I found it very easy to work with.

As mentioned earlier, you get two choices of schemes for the completed model. I choose to go with the one featured in the cover art. The schemes are very simple, and the decals were very nice to work with. I was concerned they were too thick, but once on the model and a little decal solution was applied, they settled right down and look great.

I highly recommend this kit. It may be an unusual subject matter, but the details and engineering are really superb. Thanks to Victory Models, SBS, and IPMS USA for this review product.