The Sino-Soviet Border War of 1969: The Border Conflict That Almost Sparked a Nuclear War, Vol. 1 (Asia at War Series, No. 21) 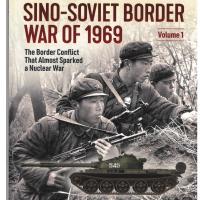 Helion & Company continues their series on Asia at War with the first of two volumes on the Sino-Soviet Border Skirmishes of 1969. The author is Russian and it was translated into English. From time-to-time there are some cumbersome sentences and the perspective of the author comes through as you read on. The book is full of contemporary photographs, so they are in black and white. There are several pages of color profiles of vehicles and uniforms as well as several maps of where the incident occurred. Please note, that there are several grizzly, close up photographs of dead Soviet border guards. If you are not accustomed to seeing dead bodies, close up, be warned.

The author lays the context for the border dispute. In the late 1960s, China was in turmoil with Chairman Mao’s Cultural Revolution. From a broader view, Sino-Soviet relations have been in a decline for some time and filled with tension prior to the border clash. The Chinese, having been subject to unequal treaties on behalf of the European powers in the nineteenth and twentieth centuries, the Chinese were not ready to recognize the Russian/Soviet boundary in northern China and were willing and able to establish their own views of the border. The location of this skirmish was Damansky Island in the Ussuri River dividing northern China (historically known as Manchuria) and eastern Siberia.

The author uses Soviet era/Russian resources and it becomes clear where he places the blame for this incident – the Chinese. This section of the border was patrolled by Soviet border guards. Since sources from both sides were tainted by the ideological forces at work in 1969, the author has had to navigate those waters in building his narrative. From his bibliography, it appears that there is a paucity of reliable Chinese sources on the incident. Over the period of March 1-2, 1969, it appears that the Chinese Peoples Liberation Army (PLA) ambushed Soviet border guards on patrol on Damansky Island. It appears to have been a deliberate act on part of the PLA and in the ensuing skirmish killed 32 border guards. Chinese casualties are in dispute.

For Soviet authorities, the clash came out of the blue and the author squarely puts the blame for the incident on the Chinese and the internal turmoil occurring in China at the time, in a sense, the incident would deflect attention to the issues inside China and pivot to an external conflict. There seems to be little doubt who initiated the conflict, but there seems to be little recognition that the Chinese had legitimate issues regarding an unfair border that needed some attention. Regardless, the border skirmish in March would trigger a wider conflict that appears to be the subject of the second volume, so please stay tuned!

Helion has been active in publishing stand-alone narratives on many of the pre and post-World War Two /Cold War conflicts that have taken place around the world. I can appreciate the attention that they have lavished on conflicts that are not known in the English speaking world. Kudos to them. Since many modelers are amateur military historians, I imagine that this will be a welcome addition to their libraries. My thanks to IPMS and Casemate Publishing for giving me the opportunity to review this book.