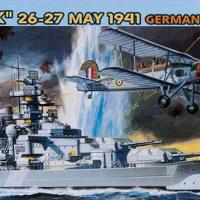 One of Dragon’s recent releases in their 1/700 scale ship series is a special edition reissue of the German DKM Bismarck. The special reissue pairs the Bismarck alongside a pair of Royal Navy Swordfish torpedo bombers. Now, having the original Bismarck, the first thing I did when I received this review was to compare the two and see what other goodies were added. The original issue was a premium kit and included a nice photo-etch set including railings [except the main deck]. The special edition includes, of course, two RN Swordfish, which are exceptionally crafted. Each Swordfish is a full model of its own, including PE. The modeler also has the option of plastic or PE wings. I opted for the plastic, as they have more depth and curve to them. The reissue also includes a new display base featuring pedestals and new main and secondary gun barrels with hollow muzzles and optional DS blast bags (more on these later). A comparison also shows newly engineered optional anti-aircraft guns.

Construction starts off with the two-piece hull. It is the same as the original issue with a right and left half. Having worked with many of Dragon’s newer 1/700 scale ships, I would have liked to have seen Dragon redo this part with a single piece hull. This would also correct a lot of the fit issues present with the original kit. So, as with the original, some internal bracing needed to be done to align the hull to the deck. I ended up with 3 braces equally spaced from the center out. Now, the instructions would have you build the guns up, and then the rear and front super structures, and then add them to the main deck. Anyone who has built a ship will likely disagree just a bit. Instead of following the instructions, I added the main deck and the rudders and propeller shafts.

First I shot the hull with a red primer. After masking, I shot the grey and then masked for the camouflage pattern. The nice thing is that, in 1941, the DKM had gone away from the splinter camo on the superstructures. With the sides of the hull completed, I sprayed the deck color and painted the details with grey. I added the boot line and set the hull aside. With the main hull finished, I then built up the secondary deck in much the same way, and then the superstructures. I always work from the bottom up and the inside out when I build ships. Once the superstructures are in place, I then add all of the deck guns and main guns, followed by radar and any other small details. The last thing I add is the railings. When building up the newly tooled AA guns, take care when handling parts, as I ended up feeding a couple pieces to the carpet monster. For the main/secondary guns, I chose the DS blast bags. Had I thought this through all the way, I may have gone with the original kit guns. The DS parts fit very well into the turrets; however, it takes a lot of work to attach the barrels to the DS and keep everything straight. DS does glue well with regular glue (I ended up using Testors liquid cement); but as it dries and the DS re-solidifies, the barrels begin to skew and you may end up with wall-eyed turrets. You can add a little more liquid cement and slowly push them back into place, but at least on my sample, it took about 3-4 tries per turret. The benefit, however, to the DS bags is that you can gently bump the barrels while putting things in place and they don’t generally break off. Instead, they usually spring back into place. Once everything was in place, I did a very light oil wash over the entire model before adding the railings. This is one thing I wish Dragon would include – full railings for the main deck. I ended up using an aftermarket railings set made specifically for the Dragon Bismarck, which includes only main deck railings.

With the Bismarck complete, it was time to build the Swordfish. Now, I offer a word of caution…THEY ARE SMALL!!! I did build both planes but, sadly, my workbench seems to have eaten the second one. The planes have slide-molded fuselages with nicely detailed wings, undercarriage, torpedoes, etc. PE is included for the wing bracing, and for those not happy with plastic, the main wings, tail surfaces, and undercarriage are also offered in PE. NOTE – the fret of PE for the planes also includes some PE rudders for the boats on the Bismarck’s deck. There are also PE machine guns for the Swordfish planes. The instructions include full paint guides for the planes and the kit includes decals as well!! (Mine have not been put on.)

Overall, I have to say Dragon’s small retools and additional details combined with the Swordfish aircraft has made for a great reissue of the Bismarck. With exception of the deck/hull connection, the fit of everything was great, with little to no issues. If you were ever thinking of picking up a Bismarck and haven’t yet, I highly recommend you grab the “Sink the Bismarck” special edition. And if you already have the original issue, well, I still recommend you grab one of the special editions. My thanks to Dragon USA for providing the review sample and IPMS/USA for the opportunity to build it.

Box art from both kits