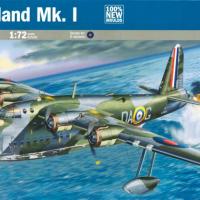 The Sunderland prototype first flew on October 16th, 1937, and the first of the production Sunderlands flew on April 28th, 1938. Production started in 1938 and was ended after 8 years. 777 Sunderland’s of all variants were built, and it served in the RAF from June, 1938 ,to May, 1959! Twenty-one years in frontline service for the RAF, and even later for France and New Zealand. (The last New Zealand Sunderland was retired in 1965!!) The Mk I was 85ft 8in. long and had a wingspan of 112ft 8in. Weighing in at 44,600lbs, it was powered by 4 Bristol Pegasus XXII engines rated at 1010hp each, allowing for a top speed of 210mph at 6500 ft.(cruising speed was 178mph). The Sunderland could fly over 1700 miles and was equipped with a galley, bunks, a sink for washing up (with a 25 gal. tank), and a proper, flushing toilet with a supply of water in an 11 gallon tank!

WOW! Upon opening the box, you are presented with 5 sprues of grey injected plastic, 1 clear parts sprue, 1 photo etch fret, 1 piece of string, and 1 large decal sheet with markings for 6 different aircraft. A 20-page instruction book is accompanied by a 23 page photographic reference manual. The grey parts are well molded with very little flash, and with quite a bit of detail. The interiors of the fuselage halves are dotted with many injector pin marks. Depending on how you want to display your kit will determine how many you will have to fix. The panel lines and rivet detail, although recessed, are really overdone (reminiscent of the old Matchbox trenches). The clear parts are another story. The small portholes are no better than the old Airfix kit portholes and I was a bit disappointed.

There are 23 steps in all, and it starts with the cockpit (the first 10 steps are for the interior), which is pretty well detailed but not as accurate as it could be. The console between the pilot and co-pilot should have 3 rows of levers and the kit gives you slots for one. There are no PE levers supplied, so you will have to add your own. Also missing is the flare rack behind the co-pilot’s seat. It may sound picky, but you can see a lot through the canopy, and these two items would have made a nice addition. As is, the cockpit does look nice. This is the first time I have used PE from Italeri and I found it to be thick and a bit hard to bend, especially the small belts. You are given a choice for the control panel, a decal version or PE version. I chose the photo etch as it is closer in accuracy to the MK I’s control panel than the decal is (the decal, to me, closely resembles the MK V’s panel). After the cockpit comes the radio room/navigator station and nose compartment. There is a fair amount of detail in the nose and you can pose the turret in the retracted position to show it off. The turrets, both forward and aft, have a small amount of detail and nicely molded guns, making them far better than the old Airfix turrets. Steps 4, 5 & 6 deal with adding the clear plastic portholes. If I build another, I am not going to use these – definitely going to use clear casting epoxy, as all but a couple of these had indentations in them, making the interior detail even harder to see. Steps 7-10 deal with the bomb compartment, turrets, and final details for the fuselage. If you pose the forward turret retracted, you can pose it anchored, as you are given a boat hook, mooring attachment, the guard for the mooring line so it does not ride on the hull (can’t remember what it’s called anymore!), and an anchor with a grey piece of thread. The winch for the anchor is molded to the floor of the nose section and you can attach the anchor line to it. The mid gunner’s station, unfortunately, is not well detailed and not quite accurate. The floor should be perforated and, as you can see quite a bit through the gun stations, it is quite noticeable. The guns, on the other hand, are nicely detailed. The two crew access hatches can be posed open, and you need to determine early on how you want them. If you leave them open, you need to clean up a few more pin marks, as they will be seen. Each turret consists of 7 pieces and both look rather nice, with finely molded weapons. The bomb bay or compartment consists of 2 bulkheads, the deck, and overhead. Parts are supplied for the armament tracks which will line up with the tracks on the wings. The racks for the depth bombs are nicely detailed, and you have the option of posing them inside the hull or extended outside. Step 11 is where you put the fuselage halves together and is where I had a little problem. You have to add the small clear round pieces on the spine at this time, and getting them to sit properly is a bit of a pain. Patience is needed and I hurried…lesson learned again. It is also when the turrets, canopy, and rudder are added. The 4 small photo etch pieces should be added to the canopy before attaching to the fuselage…trust me on this!

Steps 12-17 mainly deal with the wings and their attachment to the fuselage. The ailerons are made to be movable, but I chose to glue them. Also included in these steps are the beaching gear and horizontal stabilizers. Steps 18-19 Are the engine/cowl assembly and float assembly. The engines are finely molded and look very nice, and the assembly is made kind of easy (at least for me) by attaching the engine into the cowl, then adding the cowl ring next. Since the cowl ring is a different color than the rest of the cowling, this makes painting much easier. The props and spinners come next, although I did leave the spinners off (9029 did not have them in the one picture I have of it). The propeller detail is not quite right and I’m thinking the hub, such as it is, is too big. The floats are easy to assemble and have the points for the rigging marked for you. One problem with the struts is that if you add the bracing wires on the struts, you’ll have to make a point on them for the wire. I decided to drill into each strut and add the monofilament (10lb test), as it would be easier for me, and it was. Unfortunately, it weakened the struts just enough so that when I bumped one…you get the picture. Adding the engines is a little tricky as the contact point, engine to wing, is small and is right where the pin to the prop is. I managed to keep two of the props movable, but the other two, not so much. Steps 20-23 are the final detail bits such as mid-gunners station hatches, antenna, tail beaching gear assembly, aileron control rods (I think – they don’t look like them, but I can’t figure what else they would be), and bracings for the floats. The tail beaching dolly has nice detail but is slightly wrong. It has one wheel on each side and should have two. I used transparent sewing thread for the float bracing, as they were a bit smaller-looking than the ones on the struts (actually, the struts had flat bracing). The wings had the points for the rigging marked on them and made life much easier.

Overall, the construction was pretty easy, as almost everything fit well. The only problems I had (that I didn’t cause) were the cowl rings are just a hair smaller than the cowlings, the PE is a bit thick and hard to bend, the portholes don’t fit well in some places (mostly by the cockpit area where the fuselage curves), and the engine-to-wing connection.

Have you heard of the saying “Be careful what you ask for”? Well, this was it for me. I really like the Sunderland and was pretty excited to get it. Pretty much anything that could go wrong…did. I apologize for not have done a better job on this kit, it deserved better than me! As one friend told me, “Hey, it looks like a Sunderland!” All things aside, I strongly recommend this kit if you like Sunderlands or flying boats in general.