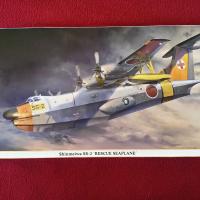 The Shinmeiwa SS-2 Rescue Seaplane is a development of the Shinmeiwa PS-1 anti-submarine aircraft. The aircraft was used in a Search-And-Rescue (SAR) role, acting as an “Emergency Ambulance” for residents of Japan’s isolated islands.

Hasegawa’s kit of the SS-2 is an older kit that has been updated to represent the SAR version of this aircraft. Overall, the fit of the kit is fair, and there are some problem areas with parts fitting together. The detail on the flight deck is sparse for a kit of this size with a lot of windows to look in. It is a tail sitter, and you will need to add weight into the nose.

The major fit issues I had with this kit center around the fuselage. Hasegawa tooled the fuselage in three pieces, two side pieces (Parts 1 and 2) and a forward lower bow piece (Part 50). The fuselage has a few widely separated locator pins that make it tough to align properly. I added in strips of styrene along the top of the fuselage to both help align the halves and to reinforce the joint. Part number 10, that goes on top of the fuselage at the wings, has a poor fit as well, and I recommend gluing it into place on the fuselage half before putting the fuselage together.

Fitting the lower forward bow piece (Part 50) was also aided by strips of styrene, as this piece has no locator pins. There was a mismatch on both sides of the fuselage where the bow meets the two fuselage halves.

With the landing gear blisters, there are no locator pins or holes to properly align them. Dry fit the main landing gears in their locations to help align the blisters.

Engine nacelles are another problem. There are no locator pins for the three pieces that make up each nacelle. Pay particular attention to which parts go together and the location of each engine nacelle. They are not identical nor are they interchangeable. There are also no locator pins where the nacelle joins the wing assemblies.

The wings have locator pin holes between the engines. These should be filled in, as there are no parts called for that use these holes. Fit of the wings is fair and will require some putty.

A minor fit issue is with the outside (outboard) flap assemblies. Both assemblies have a rib on their outboard end that requires gluing, and these ribs do not fit flush. All the flaps and the rudder are designed to move. I recommend gluing these parts into position.

I used the kit’s decals and painting guide to create a striking paint job. Decals number 3 and 4 (the aft fuselage yellow and black stripes) do not fit well, and I would recommend painting the stripes rather than use the decals. Dry fit these fuselage bands, as I may have placed them upside-down. Otherwise, the decals fit perfectly and responded well to setting solution.

Overall, this kit can be built into a nice replica of Shinmeiwa’s SS-2. My thanks to Hasegawa for the review kit.