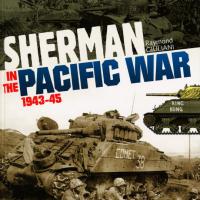 Raymond Giuliani covers a fairly rare subject, of the use of the Sherman tank in the Pacific. This book begins in 1943 as the Sherman began replacing the M3 Stuarts in the Pacific as the US island hopped towards Japan. The good news is that neither had to face any steel Tigers. Raymond Giuliani traces the trek across the Pacific island by island and also depicts the evolution of the flamethrower tank. The book includes over 350 photos, 25 color tank profiles, and 23 maps. There are spelling errors and interesting grammar choices due to the translation from French, but nothing that will hinder your understanding.

The Introduction covers the transition from Stuart to Sherman with Battalion and Company organization charts before launching into the first chapter, Taupota, New Guinea in October 1943. Each chapter basically consists of a map of the island with company deployments and progression, nice large sharp photos and descriptive text for each of the photos. Christophe Camilotte’s color illustrations highlight the black and white photos and include color ‘scraps’ to show off custom markings.

The chapter on “Calliope in Guadalcanal” shows a series of photos of Shermans outfitted with a 4.5” T34 rocket launcher and a7.2” M17 launcher that were evaluated by the Marines. Another chapter details the (later abandoned) attempts to provide tank crew with protection from gas attacks and the Japanese anti-tank magnetic mines. By the time the book progresses to Iwo Jima, the implementation of the flame thrower tanks becomes more evident with plenty of ‘in-action’ and detail shots. The author provides a nice chapter on the details and implementation of the Sherman flamethrower, including a detailed cross section of the CB-HI gun assembly. The last chapter continues as before, but tucked into this chapter are six color photos of M4A3s landing on the beaches of Okinawa. An interesting trend as the Japanese converted their 75mm guns into anti-tank guns was the additional armor that the Army and Marines began decorating their Shermans with. One sharp picture shows “The 392nd Avenger with additional heavy armor plating on the front glacis as well as hanging armored skirts over the running gear.

I was extremely impressed with the quality of this publication. The linear organization of the book that Raymond Giuliani provides, along with the superb, large photos, makes this a ‘must-have’ for any WWII or AFV fan.

My thanks to Casemate and IPMS/USA for the chance to review this great book.