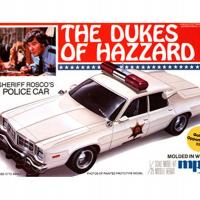 The kit is molded in a white styrene and also has a generous sprue of chrome parts, and rubber wheels. There is also quite an arsenal of weapons included, (M-16, Thompson sub-machine gun, M1, shotgun, pistol, and a grenade launcher). I guess Sheriff Rosco always wanted to be on a SWAT team. This kit depicts the Dodge Monaco police car and is a very good representation of that vehicle. It also includes a nice engine that could be detailed if you wanted to. One problem is that the hood of the car has no hinges to open so you will have to just lay it next to the kit to show off the engine compartment.

I don’t normally build car models but my son does, and he especially likes vehicles from different movies and TV shows. When he saw this up for review he wanted it for his collection, so I agreed that we could build it together.

The instructions are just like I remembered them from the old days. Six pages, tri-folded, with drawings of each assembly. They aren’t too bad, but a few of the part numbers don’t match the numbers on the sprues. Not a problem though, because you can tell every part just by comparing the pictures with the parts. The color key is very basic asking for general colors such as black, orange, blue, etc. You can relive your childhood and break out all those old Testors’ paints.

The body of the car is molded in white so I decided not to paint it but to just put a couple of coats of Future on it. I was really pleased with the results. The most painting I had to do was the interior and the bottom of the car which was painted black, according to the instructions. I used Floquil’s railroad colors grimy black, after a few days I wanted the interior to show some detail on the seats so I brushed on some Valejo black, now the black color doesn’t hide the fact that there are seats inside.

The engine looks pretty good, especially since I don’t know that much about automotive engines. It looks like most engines. The block is painted orange for this car, while the other parts are painted black with chrome parts thrown in. I really do think they did make a nice engine compartment.

The plethora of weapons was painted next. The metal pieces were painted Model master gun metal with the wood being done with Model Master leather. I put the gun rack inside the interior and positioned all of the weapons where they were supposed to go. When I installed the interior inside the body, you really can’t see too much of the weapons. Reminded me of so many detailed airplane interiors, No one can really see them, but you know they are there.

Here’s where it got a little weird. I went on the internet to see some pictures of the police cars that were on the show. They crashed so many different police cars and the replacements all looked a little different. In the show the lights on the roof were red on one side and blue on the other. If I’m not mistaken, the original kit came only with red lights. Round 2 includes both red lights and one blue, if you want it to look like the show. The kit includes a push bumper for the front of the car, but I left it off because all of the pictures I saw only had the plain bumper. Finally, I added all of the detail pieces that I wanted based on photos from the show.

The decals look in scale and worked well. I usually use the Micro Sol and Micro set system but for these I only used water and they went on very well. They include two options, Sheriff Rosco or his deputy including the Georgia plates that are the same as the TV show.

Highly recommended: We had a blast talking about the show and the car crashes. It was a very fun build and went together fairly easily. There was some flash that needed to be removed, but that is normal with most kits. The main thing is that you should have fun making a model and this one does that. Keep up the good work Round 2, I can’t wait to see what else you have in store for us.

Thanks to Round 2 Models for the fun time and IPMS/USA for the opportunity to build something that is out of my norm of 1/72 aircraft.