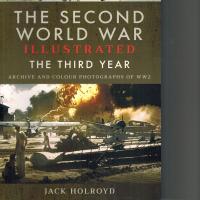 The book covers the first winter in Russia through the Canadian landing at Dieppe and is divided into 11 chapters covering the main events during the third year of the war. The sources of the photos are from England, Germany, Japan, USA, Russia and personal archives. As far as I know this is the first time that a compilation of all these photos has been made.

The book has a wealth of information in regard to different battles described in the book, they not only describe the battle with period photos, but with maps of the battle, as well as the main characters involved in the battle. The author shows us both sides of the enemies fighting a specific battle, from the mess in the fall and winter of Russia, to the sands of Africa and everything in between. Pictures of how the military personnel survived the environment and the challenge of same ar reproduced.

In addition, we are introduced not only to the individuals commanders of the battle, but some of the heroes in the described battle by including pictures of those deeply involved in the described battle. The author shows us the freezing temperatures of Russia, as well as the "warm" temperatures of Africa to the steaming jungles of Southeast Asia and everything in between. Every battle is covered with a map of the operations of the battle picture of the principal "actors", as well, the equipment used in the battle as it is done. In the Battle for Pearl Harbor the different ships involved in the battle are shown. In addition, there is a wealth of photos of equipment used by both sides.

The book is full of so much information that at times the reader may be overwhelmed by it. This is a book that is an excellent reference for the historian and anyone really interested in the events that from World War II. I enjoyed the photos very much and learned more about this conflict that I thought I knew well. In addition, this book is an excellent reference book. I have two concerns: 1 - There is too much information to digest; and 2 - the lettering below the photos is very small and at times, confusing as the same description includes two photos.

I wish to thank Casemate Publishers and Penn and Sword for the opportunity to review the book.