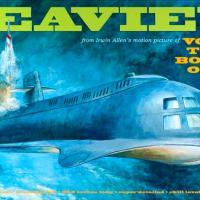 I first heard about the Moebius 8-window movie version kit when reviewing SciFi & Fantasy Modeller Vol. 25 for IPMS-USA, http://web.ipmsusa3.org/content/scifi-fantasy-modeller-vol-25, so when the kit became available shortly thereafter I had to give it a shot.

The kit is very large. It measures 38 inches long when built, with over 90 parts molded in light grey and clear styrene. Like all modern, digitally-designed kits, all parts fit perfectly; there was no warpage at all and very little flash. The instruction manual is basically a fold-out poster with concise instructions and full-color photographs of the painted kit. The box art is painted by famed Japanese artist Yoshiyuki Takani. This is the version of the Seaview from Irwin Allen's 1961 motion picture Voyage to the Bottom of the Sea. It is substantially different from the filming miniature and filming set of the later spin-off television series of the same name. Moebius also makes a kit for the TV 4-window version.

As mentioned earlier, the kit is very large, but is designed to accommodate wiring and can even be made to be submersible by R/C enthusiasts.

My original theme with this project was to do something I have never done before. I stuck to this theme throughout the build. I had never built a submarine kit, and had never done electrical lighting inside a kit before.

For this reason I overestimated my own skills a bit, but pushed onwards throughout one logistical problem after another. I ordered 5mm LEDs and resistors and had to wait several weeks for all of it to arrive. Then, despite owning several soldering irons, I could not find a single one, so had to order a new one. Then I ran out of 26 Ga. solid-core wire mid-way. In short, my ideas were bigger than my current skills, but challenging ourselves and what we know is the only way we improve.

The wiring design also changed dramatically from my first designs. I ultimately settled on 2 identical 3v circuits of 3 LEDs each in parallel, with a 9V battery in each base of the submarine powering each circuit. The rear tailfin lights were accomplished by running 4 fiber-optic strands through the narrow channels built into the kit. These fiber-optics are just picking up light from a red LED inside the submarine. In hindsight, I should have used twice as many fiber-optic strands to make the taillights brighter than they are. I also should have added another LED for the front searchlight, but adding a fourth LED to the circuit caused all LEDs to dim, so this would have required me to redesign the wiring scheme again. I was already well past my deadline, so I decided to just move forward.

I painted the kit using my own mixes of Vallejo, Citadel, and Air-Opaque acrylics applied by airbrush, as well as Didi's Magic Black ink for preshading where I imagined faint panel lines to be.

Many thanks to IPMS-USA and Moebius models for the review sample.

In the dark 4 - observation deck