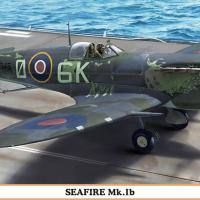 The Seafire Mk.Ib was basically converted from the Spitfire Mk.Vb. The kit follows the heritage of the actual subject, being a “regular” Hasegawa Mk.Vb with a resin plug for conversion into a Seafire Mk.Ib. Be aware this model is a conversion; that means you will have to cut and replace some parts of the plastic fuselage with the resin replacement parts. But as conversion goes, this is an easy one to get your feet wet in the world of conversions.

The boxing includes decals for 4 different finishes on 3 different airframes. The instructions only list 3 camouflage styles, but actually there are markings provided for two different finishes (blue gray/green/sky) of the same airframe (MB 345), before and after being assigned to the HMS Formidable. The other two finishes are for a training unit (blue gray/green/sky) and another one in an overall glossy sea blue, for operations in the Pacific with SEAC roundels.

The Hasegawa Mk.Vb is a lovely kit, with fine surface detail and ease of construction. I will therefore concentrate mainly on the conversion aspects of the build.

The arrestor hook parts are poured in a grey resin with a color very similar to the injected molded plastic. The plug is designed to replace a few panels in the lower fuselage behind the wing. All the cuts happen along panel lines, and the instructions are very clear on which panel lines should be used as guides for cutting.

The conversion plug fits very well in the opening in the fuselage, with minimal filling required (most likely due to my fault, rather than the molds). I did have to add a thin shim of plastic to the fuselage halves behind the wing to preserve the natural lines of the body (see pictures). I’ve also added a spreader bar – made out of sprue – to the forward part of the fuselage to ensure a gap-free wing-root. I am not sure if those spreaders were due to the conversion, some warpage on the parts, or just my construction.

Once I glued the fuselage halves (using the spreader bar and plastic shim), construction continued flawlessly and quickly toward the finishing stage.

I choose to finish the model as MB 345, in service at HMS Formidable just before Operation Husky (the invasion of Sicily). The cover art shows a heavily chipped paint finish; however, the instructions show that no such chipping was present. I choose to finish my model with no paint chipping. Painting was accomplished with Model Master Enamels and a Badger Patriot airbrush. I applied a coat of Future before decaling the model.

I did have a strange situation with the decals. Sadly, I do not have pictures, but basically the glossy surface underneath the fuselage codes had some sort of reaction (I guess between the Future and the decal adhesive) which made the surface underneath the decal become cloudy. However, after about an hour, the surface was glossy again and the decal was conforming to the surface. I applied some setting solution and everything was fine. But I’ve never seen that happening before, and it was only with the fuselage code decals. It did not happen with the stencil ones.

With the decals in place, I applied another coat of Future for a final weathering with an oil wash, which was sealed with a flat coat, and finally some pastels were used for exhaust and gun stains.

This model is a small gem. Fit is good all-around and the conversion work is simple. Given that is a conversion, I would recommend this model for the intermediate modeler. However, any modeler who is not afraid to cut plastic and use some filler should be able to put it together without a fuss. It took me about 18 enjoyable hours, with about 6 hrs in construction and 12 hours devoted to painting, masking and decaling.

I would like to thank Hobbico and Hasegawa for supplying the kit, and IPMS for the review opportunity.