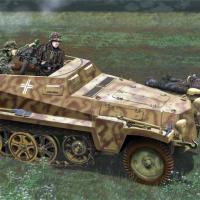 The Germans of WW2 were notorious for multi-tasking vehicles, and this one is a good example. In this case, they mounted an 81mm mortar in a standard light armored half-track. I’m old enough to remember the last time a plastic kit manufacturer took a shot at this particular make – a motorized version by Arii back in the early 1970’s. The older kit was pretty poor by even the standards of the day, although it did provide a nice ammunition trailer (to carry the batteries for the motor, of course). Otherwise, there wasn’t much to recommend it.

Dragon has filled the void with a new release which does a fine job of capturing this beastie, including “magic tracks” which eliminate the odious task of snipping some 200 track bits off of sprues.

As with all armored kits, I started with the running gear, which gave me no particular problems. Two different patterns of front wheels are provided although the instructions only mention the classic military pattern. Frankly, I rather liked the more complex version, and was able to piece them together despite the lack of instructions provided for these.

The torsion bars for the wheels are really tiny and need caution in both prepping and aligning. Each track link comes as two separate pieces, and I found it much easier to get the links together, wrap them around the running gear, then add the track shoes separately afterwards. Dragon supplies plenty of extras – roughly a dozen to 20 of each – so you can afford to sacrifice a piece or two to the Carpet God with few regrets.

The bottom body went together with no problems, and Dragon provides very nice photoetch grills for the engine, which you want to be sure to install before the hood goes on the model. There is a rather simple engine you can install, but I skipped this as mine was going to be closed up.

The interior goes together with little aggravation, although you’ll want to be sure and scrape the raised center off the ammunition pedestal. A driver figure is supplied, but I didn’t want to try and insert this little dude into the very tight space after painting, so I left him out as well. The instructions have you install the ammunition bins during this stage, but I wanted to paint them separately so left them out until after airbrushing.

The only real glitch I encountered was with the mortar itself. The instructions show what is clearly NOT the version provided – more likely a 120mm version, so some problem solving is called for to assemble the 81 mm version of this creature correctly. It also sits on both a base plate section and a couple of pedestals for the front armatures, so expect some fiddling to get all three to sit properly on the floor at the same time.

Installing the last of the body panels showed only a few places where a smidge of putty would finish the job – very nice for some fairly complex shapes. I installed the fenders then, and must note that both have large connection points that run all the way through the lower body panels. If you elect not to put anything along these interior walls, you may find yourself having to fill and sand these obvious slots. Be sure to fill and sand the tool attachment dimples on the fenders before installation as well.

Speaking of which, tool application seems a bit free-form, and I note that the tools shown assembled on the fenders don’t match those shown on the box top, so I guess there’s some flexibility here. Dragon provides a generous supply of items so you can fiddle around with them to your liking. I found the contact points for the front headlights to be incredibly fragile, however, and had to retrieve the left headlight three times from the Carpet God, with a fair amount of associative mumbling under my breath.

Clear parts are provided for the main view visors, but the side visors lack the little slit of the originals – an omission I find a little odd considering the detail in the rest of the kit.

The mortar ground plate, listed as Part E3, that fits on the rear hull is once again distinctly smaller than the kit instructions imply. Actually, there IS no “E” sprue, revealing once again a bit of sloppiness in the instructions. However, the ground plate that’s actually in the kit is the right size for the mortar provided, so ... and in any case, some additional ammunition boxes plus mortar rounds are provided, which is nice as they help dress up the interior a bit.

So there you have the assembly. There is nothing particularly challenging that I ran into during construction and just a couple of mislabeled parts (Part D14 and Part D17’s numbers are flipped). However, during final assembly of the interior I discovered that the big ammunition palette (Assembly 15) doesn’t actually fit in the designated area due to the angle of the rear wall. Definitely some fiddling around there ...

All in all, another fun kit from Dragon, and in a weird way a little bit of a trip down memory lane ... a highly recommended model with good detail and a pleasing result with modest effort. My ever-loving’ thanks to both Dragon and IPMS/USA for a chance to throw this charmer together.

Left Side
Previous Next