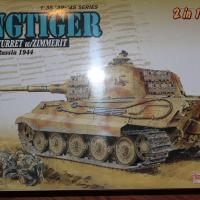 I am not going to spend a lot of time going into the history of the King Tiger. This vehicle has long been an extremely popular tank in the armor modeling community. It was the one of the most famous vehicles fielded by the German army in the late days of WWII. It weighed in at an impressive 70 tonnes and was armed with the venerable long barreled 8.8 cm KwK 43 L/71 anti-tank cannon. This particular new boxing from Dragon represents a late model King Tiger with the Henschel Turret and Zimmerit.

The first thing that you notice when opening the box is the large number of parts that Dragon provides with Zimmerit molded on. The moldings are definitely very impressive, even if they are a little out of scale and create some issues that I will go over later. The kit has parts for the upper hull, front lower glacis plate, rear turret hatch and two turret options. The two turret options are for one that is fully covered with Zimmerit and one that has a large open space that is often left clean for the Panzer Battalion emblem. The molded-on Zimmerit is definitely impressive and is begging to be hit with a few washes.

The first few steps of the assembly are for the running gear and proceed without any problems. If you have built any of Dragon’s other King Tiger kits these steps are identical to those kits. The first issue is with the assembly of the brackets for the jack (MA8/MA9) in step 5; the assembly diagram is very vague and makes no mention of the fact that you will need a small plastic rod to complete the assembly. The photoetch parts are also frustratingly small and there are no extras so be very careful when assembling these parts. Fortunately, if you do make a mistake, the kit helpfully still has the injection molded part (B14) which can be used in place of the photoetch if desired.

Moving on to step 6 and 7, we encounter the first issues that I had with the molded on Zimmerit. Zimmerit is an anti-magnetic mine paste that was applied in the field, so it should not be under any parts of the tank that were assembled in the factory. This includes parts C6, C7 and C4. The brackets for C6 and both of the exhaust guards should have been attached to the hull at the factory so there should not be any Zimmerit under them. The kit does not leave gaps in the Zimmerit where these parts attach and results in some annoying, but small, gaps under the parts. I chose to fill around these parts with Mr. Surfacer but you can also try to remove a little of the Zimmerit under the attachment points for them as well. I had a similar problem in steps 10 and 11, specifically with fitting the hull top and fenders. For the main hull, I had major gaps on both sides where C1 and C2 attach. The gaps were even on both sides for both the upper and lower glacis plates. These gaps were extremely difficult to fill because of the Zimmerit and their location, but with a lot of putty and Mr. Surfacer they can be filled. There is also a fit problem with the fenders. When I fitted both fenders I ended up with long, thin gaps down both sides. This was easily fixed with a few applications of Mr. Surfacer.

The turret assembly went very smoothly with no major issues. Dragon helpfully includes an extremely nice single piece main barrel for the 8.8cm cannon, so with careful removal from the sprues it requires very little clean up. The only real problem I had on the turret assembly was again due to the molded on Zimmerit. Parts K12 are for the large hinge on the rear loader’s hatch on the turret, and again they would also have been attached at the factory. So they should not have any Zimmerit under them but the kit doesn’t provide any clear space for them. This leads to small and annoying gaps around the part that are very easy to fill with a couple applications of Mr. Surfacer.

Finally, for the last stages of assembly we move on the tracks and tools. The tracks are thankfully Dragon’s fantastic Magic tracks. They are well molded and only require the clean up of two small pin marks on each track, very easy to handle with a little sanding. My only issue with the tracks is that Dragon has never included how many links to use per side in the instructions for any of their King Tigers. For my Tiger I ended up using around 91-92 links per side. After painting I assembled them in a single long run using Model Master Liquid Cement and let them sit for at least 30 minutes before forming them to the running gear. I used the Model Master Liquid Cement because it melts the plastic to bond each part and due to this has a nice long cure time.

I ran into several issues with the tools while working on this final assembly stage. First, the kit supplies some very nice braided metal wire to represent cables but this cable is very stiff and has a lot of spring to it. This means that it is very difficult to form what we need for the cables. I would recommend replacing it with after-market copper braided wire. I was able to make it work but I had to glue it down with super glue constantly to force it into shape. Also all of the lengths quoted in the instructions are way too long. For the shorter tow cables of the thicker wire the instructions call for 240mm, but the actual length required is closer to 180-200mm. To see what the longer length looks like see the pictures below. Since I discovered the problem with the cables during final assembly, if I decide to show this build I will have to go back to correct the cable problems. For the thinner longer wire the instructions call for 430mm, the actual length required is closer to 410-420mm.

Moving on to the rest of the tools, the instructions use photoetch parts for only three of the 6 total tools. It also only provides enough parts for these three tools with only one extra set of clasp parts to account for errors. The clasps are very impressive but extremely small, which can lead to problems during assembly if you are not very familiar with working with photoetch. Thankfully, being a Dragon kit, there are extra tools that have molded on clasps included in the spare parts if you choose not to use the photoetch. This is the route that I chose so that all of the tools were consistent.

Last of all there is the painting and the decaling. The instructions have three very interesting options all from sPzAbt.505 on the Eastern Front in Russia from late 1944. The kit includes a small but fantastic set of decals printed by Cartograf. The register on the decals is perfect and they settled down very easily over a light brush coat of Pledge Floor Care Finish. Even over the rear turret Zimmerit, I floated the decals into wet PFCF and liberally coated them with MicroSol. They dried perfectly with no silvering or bubbles.

Overall this is an impressive kit. It builds up quickly and for the most part fits really well. There are some errors in the instructions and a few fit issues that make the assembly interesting. But with planning and little experience, you will have an extremely nice and impressive example of this iconic vehicle for your display case. My thanks to Dragon Models USA and IPMS for giving me the opportunity to review this kit.