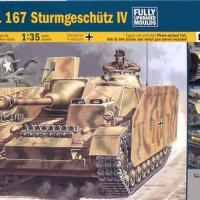 Sturmgeschutz, abbreviated StuG, was the weapon of the Strumartillerie, the branch of the German Artillery tasked with close fire support of infantry. StuGs were very successful in their intended support role and destroyed, among others, many bunkers, pillboxes, and other defenses. The StuG is not generally considered to be a true tank because it lacks a turret. The gun was mounted directly in a casemate-style fashion, with as low a profile as was possible to reduce vehicle height, and had a limited lateral traverse. Omitting the turret made production simpler and less costly, enabling greater numbers to be built. By late 1943, improved Allied tanks and tank destroyers with improved guns, rotating turrets, and superior mobility forced the StuG into being primarily an ambush weapon. From December of 1943 to March of 1945, 1139 were produced by Krupp at Magdeburg. StuG IV (Sd.Kfz.167) was armed with a 75mm StuK 40L/48 gun mounted in a cast version of “saukopf” mantlet. The majority were issued in armored companies to infantry and Panzer Genadier divisions, with few exceptions.

This kit comes in the standard size armor box with blue and yellow bordering and nice artwork. Upon opening the kit, you find 8 gray sprues, a PE fret, a metal barrel, decals for 4 different assault guns, and instructions. The sprues have a bit of flash. The kit looks to be a reissue of a older kit with a metal upgrade. The sprues are not labeled A, B, C, or E. I had to make labels to make it easier to find the parts. Also, parts were not numbered on the sprues. I had to look back at the instruction to locate some of them. The flash on the parts did not pose much of a hassle and was easily cleaned up. The PE fret parts were not too thick and bent easily. The metal barrel looked too thin to start. Once the muzzle brake was added and the barrel was mounted in the cradle, the gun looked like it belonged there. The decals provided went on smoothly and set flat on top of the gloss coat.

The instructions were a bit of fun. They have 14 steps of construction with a few typos as the number call outs did not correspond to the proper part and or sprue.

I choose to build an unknown unit in solid Dunkelgelb from 1944. What little research I did made me feel that this kit needed Zimmerit. I used the Eduard set for the old Tamiya StuG IV. It did not fit well but I spliced and chopped it up to make it work.

The kit was finished with Tamiya XF-60 with 3 different colors modulators. Also, ModelMaster and Vallejo Acrylics were used. AK Interactive washes and Pigments for weathering and Testors Dullcoat rounded out the finish.

Overall, this was a fairly nice kit with little hang ups. Total time invested was approx. 16 hrs. Add another 3 hrs. if you include the Zimmerit. I would like to thank Italeri and Model Rectifier Corporation, and IPMS USA for the chance to review this kit – and you for reading it.