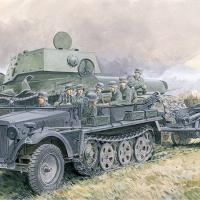 The Sd.Kfz. 10 was a German half-track used as a prime mover for artillery pieces or special applications, mainly in the early years of World War II.

Dragon Models has multiple kits of their “basic” Kfz.10 kit, with some including additional parts to make the extra-armored versions or with added parts for an artillery piece, as in this case.

Upon opening the box you find 15 sprues (one clear), two bags with individual links for the tracks, two photoetch frets, a set of masks for the windshield, and a small decal sheet for the three marking options, all representing Eastern Front vehicles. The instruction booklet follows the typical Dragon style, printed in black, white, and blue, with a total of 15 steps for the half-track and 12 steps for the artillery gun. There are no figures in this boxing, but with the large selection of Wehrmacht figures available, that is not an issue in my opinion.

While the half-track construction spans 15 steps, some of the steps have “sub-steps.” One of the first decisions you have to make is choosing the style of front tire you want to have. One tire is of the sliced/thread kind, while the other option represents street tires.

Construction then moves on to the hull, torsion bars, and shock absorbers. The next two steps cover the assembly of the engine and full transmission system. A significant portion of the running gear will be visible, so time spent here will pay off later. I would suggest that the engine and transmission to be treated as a complete subassembly, to include painting and weathering, before moving forward in the construction.

The next steps relate to the driver and passenger seats, the rolling wheels, and the hull sides. Once you have all the sides and fenders assembled, you can have some fun detailing the vehicle; that is where the two photoetch frets take this model to the next level. Many boxes, handles, straps, and other details are represented in photoetch for an accurate scale thickness.

In the final steps, the kit offers the option of a closed or open hood (to expose that nice engine), and the instructions call for assembly of the tracks, which consist of 42 links per side. The individual links allow you to drape them very realistically over the returning rollers. The very last step for the half-track relates to the bench seats and canvas.

The instructions then move to the other kit in this boxing, a very nice PaK 38 antitank gun. There are 12 steps simple steps to build the gun. It almost looks like it would be possible to build this gun in a weekend.

Construction starts with the carriage/wheels, then the cannon itself, the loading mechanism, the cannon legs, and finally, the shield. You have the option to set the legs in transport mode (attached to the half-track) or in combat position. While the gun is a simple kit, it adds value to the boxing and opens up many diorama options.

As far as painting options go, you get a choice of two overall gray and one yellow with green splotches schemes. Each option is for an Eastern Front half-track.

Considering all the parts and the photoetch details, I recommend this kit to the average to experienced modeler who has the attention span for a long build.

I would like to thank Dragon Models USA and IPMS/USA for the review sample.