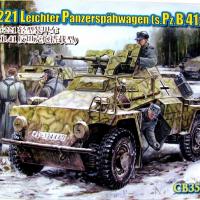 This was one of my first Bronco Models kit and not a big armor fan I admit that and so I did not quite know what to expect. The box arrived and it was a pleasant surprise. The box was pretty sturdy and its contents were well packed. The contents consisted of nine individual wrapped grey sprues, one small reseal able bag containing one sheet of photo etch, two small springs (for the seat), ten springs for the suspension (8 needed and 2 to offer to the carpet monster if need be), and the sheet of decals. The instructions are in a twelve page booklet with exploded views and a short history on this vehicle on the cover page. The Instructions show four marking options, Option 1: Unknown Unit, Italian Front, 1942, German Grey. Option 2: SS Unknown Unit, Russian Front, 1942, Dark Yellow with Red Brown and Dark Green lines. Option 3: SS Unknown Unit, Gun Fire Exercise, Germany, 1942, German Grey. Option 4: Unknown Unit, Eastern Front, 1943, Dark Yellow with Dark Green and Red Brown Camouflage.

Having already said that I am no armor guy, please forgive me if I get some names wrong. The parts are well molded with very little flash. There are some sink marks but most are in places where you won’t see them anyway. The weld lines are very nice and appear to be in scale. I started with the frame and this went together well as all lined up with no problems.

In step three I had a problem with the springs in the double wishbone suspension as they seem to be too long and took a lot of pressure to work which I clipped one rung off each spring and they fit much better.

The interior goes together nicely and has a good amount of detail with helmets, canteens all kinds of other stuff mounted to the hull and this is a good thing as the top is open. All doors and hatches can be left open or closed. An engine would be really nice for this and maybe a driver or crew member.

In step nine it says to put the aiming or fire control seat in. I did and then had a fit problem later on when I put the hull top on. So I had to take it out and reset it. If I ever build another one of these puppies, I would leave this seat out until the step before I put the gun on.

In step sixteen there is a problem with the numbering for the fender supports; two are numbered the same and the right rear was numbered wrong. I bent all of them then went by the picture to see what went where.

Step 19 has you building a couple of neat ammo boxes that can be shown stored about the interior and exterior of this little gem.

All else considered this was straight forward build and with the exception of a minor bit of care needed proved a good fit overall and required very little putty or sanding.

In step 2 and before I joined the upper and lower hull the interior needed to be painted. I used Model Master and Tamiya Acrylic paints for this project starting with Panzer Interior Buff for all interior wall and roof surface colors. The floor was German Grey and all other equipment painted their appropriate colors, per instructions.

I decided on doing Option one and use German gray as the overall color. After letting the paint dry for a day, I painted and detailed the tools.

All the tires were painted before being mounted to the axles and then the spare was finished and mounted.

Again, having waited a day for all to set and dry, I then applied future floor wax to give a gloss to the areas where the decals could go on so they would have a smooth surface.

Very little needs to be trimmed by way of carrier film and I used micro set to soften them. The decals settled on very nicely. After they dried, I sprayed the whole car with dull coat to protect everything.

This kit went together well and with good fit. There is a lot of potential to use this car in a diorama either alone or with other vehicles. With other Bronco kit reviews I have read, there is mention of lots of parts for the parts box as it also appears that there are extra parts to make another version but there is no mention of that in the instructions.

I would like to thank IPMS/USA and Bronco Models/Dragon USA for the opportunity to review this kit.