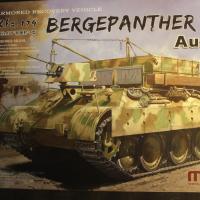 With the development of the Panther and the Tiger 1 the Germans came to the realization that they needed an armored recovery vehicle that could handle the weight of these larger vehicles. MAN was originally tasked converting Panther Ds for use in this capacity. The vehicles selected for conversion had the turret removed and replaced with a central 40-ton winch and a large rear spade to dig the vehicle in. A wooden work platform was built over the winch and a light crane (1500 kgs capacity) was installed on the rear deck. For armament, a 2cm KwK-30 cannon was mounted on the front along with the standard machine gun. This new kit from Meng is the first new modern kit of this interesting vehicle and the first release of this vehicle since the old Italeri kit from the mid-1990s.

The base kit for this release is Meng’s new Panther A that was released in 2017. There are several new sprues for parts to turn the vehicle into a Bergepather Ausf. A. As usual with new Meng releases, the large box includes an impressive collection of extremely well molded sprues with no visible mold issues or flash. There are ten sprues in sand colored styrene, a sprue of clear parts, three sprues of track parts, a ladder of poly-caps, two sheets of Photo-Etched (PE) brass, brass chain, two types of cable, a decal sheet, the instruction booklet and separate color and markings guide. This kit does include a complete interior that is very nicely detailed. The only real omission is the engine bay which is empty.

The construction starts with the suspension and lower hull tub,these steps are extremely straight forward. I encountered no issues with these steps and quickly moved on to assembling the interior. For building the interior, I broke the steps down into sub-assemblies based on what needed to be painted and when. For paints, I used the WWII Interior set from the AK Interactive Real Color lacquer line for the major colors with Tamiya acrylics calling out some of the details. The interior of the fighting compartment is well designed, and everything fits well, as long as you plan ahead with painting and sub-assemblies it will be straight forward. The only issue to note is in Step 7, the seat backs (part M18) has really nicely molded spring detail which I had mistakenly assumed were photo etch. A nice dry brushing really highlights this detail very well.

I painted all interior parts of the hull at the same time, A2 and its parts, B16/B17 and their parts, and all of the parts from steps 2 through 12. Then slowly assembled them as needed. The assembly of the winch starts in step 13 and there are some minor issues with the build up here. I broke down the parts for painting based on how I would be spraying the different subassemblies to ensure paint coverage. Once the parts had cured it was time to install the cable which presented some problems. How to run the cable through the different parts of the winch is fairly clear but in order make sure there wasn’t too much of the cable outside the hull I had to repeat the installation a few times. The directions don’t specify how many times the cable needs to be wrapped around the drum, it will require some trial and error. It can be difficult and a little frustrating to get it exactly right especially without damaging the paint, but the final result is well worth the effort.

Once complete the winch installs easily into the rest of the hull and we move on to the inside of the upper hull. I had no major issues here and the fit to the lower hull is great. The only real problem I encountered was at the end of the build, I had left the vision ports out assuming I would be able to install them through the opening in the top of the hull. Unfortunately, you really can’t reach their holes from the outside, so I would recommend installing them as directed and masking them carefully. Once the upper hull plate is installed the sponson plates may be installed as well and here is where I encountered my first real fit issue. The fit in step 24 was extremely tight and I needed to use some filler to correct some gaps that I found.

Unlike most Meng kits, this kit does not include movable suspension as there are no full torsion bars. So, in step 27 be careful when installing the trailing arms. The fit is very tight but there is still the potential for having issues with wheels not reaching the ground if you aren’t careful. Moving on to the assembly of the dozer blade, the assembly is fairly straightforward. The only issue that I had was in the first part of step 37, both arms for the dozer blade required some filling to hide some seams.

There are two options for the build that have different requirements based on the markings. This doesn’t really come into play until you reach step 34, except for drilling the location holes in step 18, and it’s time to start working on the tools. I made my choice at this point but left the tools off and unpainted until after I had completed the first round of painting. All of the tools are accurate, well molded and rather delicate. The instructions have some very helpful paint call outs for each tool, and I used all Tamiya acrylics for the paining of the tools.

Next comes the assembly of the working deck/maintenance compartment. The parts here are very well molded with a very nice wood texture on most of the parts. I left the deck parts in step 39 separate to allow for easier painting and to allow for display of the winch later. There are two options for display here, sides up and locked or down. The next choice is to pick if you want the crane deployed or stowed. I personally chose deployed and step 41 deals with both options. The last option in this section is for open or closed rain cover for the fighting compartment in step 42. Both are very straight forward. The last part is the un-ditching log in step 43, which is extremely well detailed and would lend itself to washes. I left it off until after final painting.

The last major part to install is the completed working deck/maintenance compartment. It fits on the main deck pretty well. I just had some minor fit issues near the rear on the rear deck. I painted the interior of the compartment prior to installing it. The next few steps deal with the completion of the exterior details. Steps 45-47 cover the installation of some exterior details but primarily the PE side skirts. Be careful to install the supports in step 45 straight and to follow the order of installation displayed in step 46 to avoid fit issues. Steps 48 and 49 have a couple more options: first the divers and gunners view ports can be displayed as open or closed; Second, extended or short fenders. Neither option is tied directly to a marking option but if you look at the painting guide the extended fenders match option B only.

Next in steps 50-54 the deployed crane is built. Overall the fits are great and there are two options for display, left or right. The only issue I had in assembling the crane was building the lifting hook assembly as the directions aren’t very clear on how to run the chain through the pullies. The diagram doesn’t make sense, so refer to your references for guidance. Once the crane was assembled, I weighted the main arm down while it dried to attempt to give it the appearance of weight and I left it unattached from the hull to allow for easier painting.

The last two parts of the build deal with the tracks and the assembly of the weapons. The tracks are not the usual moveable links that come in Meng kits. They are single link, non-movable links that are made up of 3 parts, 2 guide horns and a single link. The links require a fair amount of clean up and work to prepare them. Also, there is no official jig or guide for assembly. There is a small guide for making the curve behind the sprocket that is not mentioned in the instructions. The instructions call for 87 links per side, but I found it was closer to 84-85 links per side in practice. Step 55 deals with the machine gun and step 56 deals with the KWK38, and there were no issues noted during the assembly of either weapon.

The painting guide provides guidelines for 2 different vehicles: 3 tone camouflage from 1944 in France; and all over yellow from 1944 Eastern Front. All call outs are for specific AK/Meng colors. I work primarily with Tamiya paints and the scheme I chose was A for the 3-tone camouflage. I used paints Tamiya’s range, XF-59 Desert Yellow, XF-64 Red Brown, XF-61 Dark Green and XF-69 NATO Black for the tracks. There are only two decals, but they are very nicely printed and seemed to react well to MicroSol products.

Overall this is a great kit. For a kit that includes a mostly complete interior the build progresses pretty quickly, the engineering is great, and the fit is awesome. It seems to be fairly accurate and is very impressive once built. Due to the fact that it does have an interior that can be complicated to build, I can’t recommend the kit for a beginner. But if you have some experience, don’t mind the single link tracks, and are looking for a first interior build I would highly recommend this kit. My thanks to Meng Models and IPMS for giving me the opportunity to review this kit.