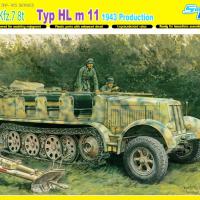 I began building Dragon Model kits when they first became available back in the 1970’s. Even back then they were a breath of fresh air on the modeling scene. They offered fascinating subjects never seen before and although sometimes a bit simplified, I liked them a great and built numerous models from their catalog, enjoying them all. My, how they have evolved over time.

This new 8 ton half track kit is a fine demonstration of that evolution. The kit consists of 9 crisply cast sprues as well as finely molded vinyl tires, wire cable, photoetch, decals and even masks for the windshield. All of the track pieces are precut, prepped and bagged, eliminating hours of work. There are also numerous parts which benefit dramatically from the new slide molds including a one piece chassis, spare tire rack, horn and other bits. The fit, for the most part, is extraordinary and the finished product offers a highly detailed undercarriage and drive train as well as opening storage racks. There are only a few places where I bumped into the occasional challenge, and I’ll note these for you in this review.

In Step 2 the location for the engine end of the muffler is a bit vague. As both ends of this structure have to wend their way through the tangle of the complex chassis assembly, I got a bit lost so I simply cut off the pipe leading to the engine with the understanding that I’d install it when I had a better idea of where it was going. This proved to be no problem and simplified installation.

Step 8 is the installation of the half track running gear, and I would recommend you assemble the tracks at this point rather than Step 15 when you have the entire assembly to deal with. The tracks come with separate rubber pads serving as connectors, but if you want to make this easier, I would suggest assembling the tracks without the pads, wrapping them around the wheels and then adding the pads afterwards. The little bags of these track parts come with about ten spares of everything, so there’s plenty to offer to the Carpet God if you fumble a bit.

Step 11 and 12 involve the assembly of the bodywork, and the control panel assembly installation seemed once again a bit vague to me, so I assembled the body work and installed the engine firewall at that time in order to understand the arrangement more fully. There is a bit of trimming on the back of the side panels to make this version, but it’s clearly marked on the plastic and not a major problem. In my enthusiasm to complete this model I installed the rear equipment rack, part E22 backwards and didn’t notice it until the next morning. Even so, I found I could pull it off and reverse it without dire consequences. However, a note here – although all the equipment racks are provided, there are a LOT of pin marks in this area, which you might want to fill if you’ve going to display any doors open. Despite all my clumsiness, the body panels fit together very nicely indeed. You might need just a touch of putty at the rear end of the side panels.

In Step 14 you are required to remove part of one front fender. Again, this area was well marked and didn’t prove difficult. I chose to hold off assembling the external equipment racks until the body was complete on the chassis in Step 15, and I think it was a good decision. Despite the care with the packing, Part H7, the back rack, was severely warped on my copy and despite my best efforts, is still not what I would consider ideally assembled. If I were making this model strictly for myself, I would probably have replaced this item with plastic rod. However, it doesn’t look bad even so. Eventually I’ll probably throw a tarp over the worst sections.

All in all, though, this model went together surprisingly easily despite its complexity. Fit was consistently good – even a little TOO good on a couple of parts as they were a bit tight, but I still wouldn’t change a thing.

This is a wonderful model of a fascinating vehicle and beats the old Tamiya kit of this monster hands down. If you happen to get a copy of Dragon’s 105 mm Howitzer to go with it, so much the better! My hats off to Dragon on this one, and my thanks to both Dragon Models and IPMS/USA for a chance to build this delightful kit.

with arty
Previous Next