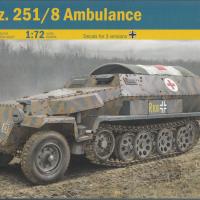 The Sd. Kfz. 251/8 was the ambulance version of the personnel carrier halftrack built by Hanomag. The vehicle was known in the Wehrmacht as the Krankenpanzerwagen, (armored ambulance). It could carry 8 “walking wounded” or 2 stretcher patients and 4 seated casualties.

There are 4 sprues in the box, along with the decals and instructions. No clear parts. I pretty much followed the instructions as far as assembly, starting with the interior and then putting the top and bottom of the main compartment together. I did take a picture of the interior before I did the final assembly, because that’s the last time anyone’s going to see the driver’s compartment, since there are no windows or openings.

I was very pleased with the fit of all of these parts. The only place I had any fit issue was the rear doors on the “passenger” compartment, which had a small gap. The body and the wheels went together very nicely.

I applied the decals at this time. My experience is that the more small and delicate parts I have on the model when I put on decals, the more I have to reinstall or repair. The decals came off the backing paper nicely, and were tough enough to be moved into position without tearing or folding. I did have a little trouble with the L shaped markings on the rear fenders, as they wanted to fold. But I convinced them to lie flat. Once the decals were dried, I sprayed a coat of Testors Acrylic Flat to reduce the shine from the Future and to protect the decals.

Next it was time to install the tracks. The tracks are “length and link” and do present some interesting moments during assembly. The length sections went onto the wheels quite nicely, and the individual links were put on the drive sprockets, they behaved well. But when it came time to put the links on the rear wheels, they would invariably turn 90 degrees so that the slot which was supposed to fit the next track link would go around the wheel. These were tiny parts, and just getting ahold of them with tweezers and reinstalling them was an exercise in miniature dexterity. I used Testors liquid cement thickened with tube glue to give me a sticky surface to put the track link on, and some time to do the reinstallation.

I installed the finished track sections. They went into position neatly, and I was happy with that. I then installed the front tires and the headlights.

And the model was finished. I am happy with it.

Recommended. This kit has some intricate track parts, but the fit is good and the decals are very good.

Many thanks to MRC and Italeri for the kit, and to IPMS USA for the chance to build something a little different.