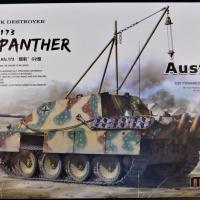 The Jadgpanther was a Heer (German Army) tank destroyer based on the Panzer Mark V Panther tank chassis. They had an 8.8cm anti-tank gun installed in a fixed superstructure that replaced the Panther’s turret and 7.5cm gun. This Meng Model’s Jadgpanther is the last production run made from November 1944 to May 1945.

Meng packages this kit in a large, sturdy box with very nice box art and an AK-Interactive paint chart of the required colors to finish this kit. Inside this box are 10 tan colored sprues of plastic, one clear plastic sprue, one photo-etched sheet, one metal side skirt sheet, a sprue of poly caps, a small decal sheet, metal tow cable and a small length of chain for the boom. A bonus for this first edition run is a metal barrel. The instructions are a 26-page booklet with all color printing. There are 38 building steps. I like how Meng has the parts you need to add in each step a tan color and the unfinished kit in a grey. This makes it easier not to miss parts. The history of the vehicle in on three aged tan card stock sheets that are three holed punched on top, like they go on a hanging clipboard. There are over 1000 parts with about 650 being the tracks. You have to decide what version (A, B or C) you are building before you start since there are different steps for some. Three full color painting schemes are at the end of the booklet.

Construction starts on the road wheels and lower hull, like most other armor kits. I did go ahead and drill the 20 holes in many different hull parts. I just looked ahead in the instructions and drilled them all while I had my pin vise out. The road wheels have poly caps in them, so they can be removed easily. The lower hull is built from flat pieces, but has internal supports, so everything lines up well. I did have a very small gap under the front plate, but a little pressure helped seal that. There are details on the bottom of the hull too. The suspension arms have some play in them, and I left them unglued. This helped line the wheels up later and them I glued in place.

The upper hull is a sub-frame that the armor plates and engine deck glues to. This has guide pins that line up with holes in the lower hull that almost snap in place. But this caused gap problems with the rear plate and the upper hull. Also, the front joint between upper and lower hull had a small gap. I used lots of glue to soften the plastic and pressed parts together hard to fill these gaps. This was a big sloppy and I wish these parts fit better.

The next construction step is the tracks. Be prepared to spend about 10 hours on these. Each track link has three sprue attachment points that need to be cleaned. The problem is that the sprue gates are the concaved parts of the tracks. I had to uses a knife to carve away the cut nubs, then use a rounded metal file to get it all out of these concaved areas or the tracks will not fit together. Then there is flash on the other side of the track links that need to be removed or the links will not join properly. I used a small square metal file for that. There are two hollow guide horns that need to be glued to each link. The sprue gates are on the bottom of these horns, but still need to be filed down or they will not fit correctly on the links. You have to do 87 links per side – 174 total, plus 12 more for the extra tracks on the side storage area. That is 372 guide horns that need to be added. There are also extra cleats that can be added to every other track link. After I spent a week and about 12 hours doing about 120 track links, I decided to take a shortcut. Since I was using the side skirts, I skipped making the upper run of links. I made the links just long enough to wrap around the sprocket and rear idler. Building the tracks was very tedious and it almost killed my motivation to work on this kit. Luckily, I went on a weeklong vacation to the beach after finishing the tracks. Meng does offer a working track and running gear option you can buy. This might be a better option then the kit supplied tracks.

The rest of the build went well. The front plate needs a lot of pressure to get it to fit in place correctly. This plate needs to line up perfectly or the side armor will not fit well. The exhaust system and engine deck builds nicely. The instructions do have the round photo-etched screens marked incorrectly. Screen 27 is the smaller one and needs to go where 26 is shown going. Screen 26 then goes where 27 is supposed. There is a lot of photo-etched parts on the rear deck and side skirt brackets. I like how Meng has clear tape on both sides of the photo-etched sheet. I could cut pieces off and not sorry about them flying off into the unknown. There are some long, half-rounded plastic left over from the push pin molding process. These will interfere with the interior construction, so they need to be removed.

There is just a little interior detail. The gun breach is included and inside of hatches are detailed. The two top hatches and rear superstructure hatch can be opened and closed. I included these details so I can add figures later. The antenna mount has just a nub for an antenna, so I cut this off and replaced with wire. The crane was easier to build on the vehicle unlike the instructions would have you built it off. To get the angles of the supports correct, it needs to be on the vehicle. I did not glue in on, so I could remove it of painting. There is a metal chain for the boom and a photo-etched chain for the block and tackle. This photo-etched chain was a pain to get wrapped around both blocks correctly. Then I used burnishing fluid to darken it so paint would stick to it. After a couple application, the chain started falling apart. I replaced it with black sewing thread. The tread was so much easier to work with.

I left the road wheels, tracks and side skirts off for paint. I found it worked best to paint the wheels, lower hull and tracks, then install them. I installed the side skirts next and masked off the lower hull. You can not add the road wheels or tracks after installing the side skirts, since they block the top part of the wheels. I only decals supplied are the crosses, so I added some numbers from my spares. The kit decals are very nice and thin.

Overall, this kit was enjoyable to built, but the tracks really will try your patience. I would like to thank Meng Models and IPMS for the opportunity to build this new kit.

Side Photo on Box Top of Finished Kit

Photoetch screens, side skirts and screen

Periscopes are clear plastic so they were masked

AK Color Guide on Side of Box

Close up of right side and metal tow cables

Top run of tracks not needed and will save 3 hours

Side view of track short cut

Close up of front showing extra cleats and weld seams