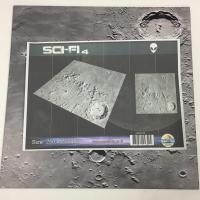 All of us, at some point, have finished a model after many weeks or months of work, and realized that it needed a display base of some sort to enhance the piece. But creating a base can often be just as time consuming as the model, and if you are ready to move on to another project, it may get put on the back burner or never get done. Coastal Kits is working to provide a solution to this problem with several premade, two-dimensional bases that allow you to quickly and easily enhance your model. For this review, I will be looking at the one of these bases, which is called Sci-Fi 4.

The base measures 250x250mm (approximately 9.84x9.84 inches) and is made of sturdy plastic board material that is 3 mm thick. It has a little flexibility but does not bend easily. As an experiment, I tried to make an indention in the top of the display with my fingernail with a moderate amount of force and was unable to make a dent in the material. If this base can withstand this, it should be able to withstand the weight of most styrene or resin models without compressing.

Depicted on this base is a high-resolution, two-dimensional image of a moonscape. Viewed at different angles from a distance, it may even give the illusion of being three-dimensional. This particular base would be perfect for use with some of the smaller scale Space: 1999 kits, but would also work well with models of real space, Star Wars kits, or any other space subject. Because the image is two-dimensional, displaying your model in flight over this base would be the most effective.

As listed on their website, Coast Kits carries a large number of similar bases, including 11 other sci-fi bases of various sizes and scales. In addition to these, they also carry several bases appropriate for automotive, aircraft, armor, ships, and railway subjects with a wide variety available for each.

The Sci-Fi 4 base is of high quality, and it, along with other Coast Kit products, provide a great solution to display your models quickly and easily. While it may not compare to a well-made three-dimensional base, it is a beautiful, time saving alternative. I would recommend these bases and will be purchasing a few other of their displays myself.

Note: There are 2 photos with a 1/72 scale Moebius Cylon Raider. While this model is slightly too small for this base, it gives you an idea of potential uses for the base.

Thanks to Coastal Kits for supplying the Sci-Fi 4 base for this review.

Sci-fi 4 base with package material

Sci-fi 4 base with Cylon Raider

Sci-fi 4 base with Cylon Raider 2
Previous Next