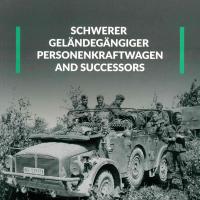 Alan Ranger is a former British Royal Engineer, engineer, collector of World War II militaria and original period photographs, and prolific author. Alan started his publishing days with Model Art of Japan and has already authored 25 books in the Camera On series, typically focusing on weapon systems and vehicles.

Camera On Number 27 focuses on the World War II German heavy off-road wheeled passenger soft skinned vehicles – the title is self-explanatory - Schwerer Geländegängiger Personenkraftwagen and Successors, the Horch 108 Type 1, licensed built Ford Type EG, and light truck chassis Steyr 1500 and Mercedes Benz 1500A and S types. The beauty of this book is the photos were taken by German soldiers during their wartime service, not posed and polished propaganda shots.

The Schwerer Geländegängiger Personenkraftwagen (abbreviated as the s. gl. Einheits-Pkw or Kfz.21) translated as the heavy cross-country standard passenger car, was produced by Horch and Ford from 1937-1942. Used primarily as personnel carriers and light gun towing vehicles, there were also closed body ambulances, commander cars, searchlight vehicles, and other special use vehicles. While reliable, the vehicle weight came in at over three tons for a one-ton cargo payload. Wartime constraints and shortages soon required a replacement, and the subsequent developments were one-ton trucks from Steyr and Mercedes Benz.

Modelers and historians looking for photographic inspiration are bound to find a s. gl. Einheits-Pkw they want to reproduce. This amazingly detailed collection of photos reflects the kraftfahrzeugen (Kfz) variants, including:

There is a lot in these 80 pages of photographs on a little covered WWII German vehicle subject. While the combat vehicles typically get the majority focus in books, history, and the limelight, it is the often-unsung support roles that set conditions on the battlefield. Author Alan Ranger does an amazing job bringing this little-known support vehicle into the spotlight it so richly deserves.