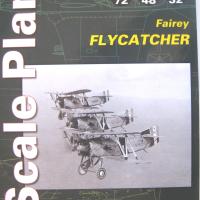 Strangely enough, very few kits have been issued of this aircraft. The British firm, Aeroclub has produced a 1/72 scale version, as have Esoteric and Veeday. There is an Impact version in 1/48 scale. I have built the Aeroclub version, and it has been reviewed by Carmel Attard on the modelingmadness.com site. It is a fairly nice little kit, and I am glad to have one in my collection. I have included a photo of the model.

Aside from various references, there appears to be very little information available about the Flycatcher. Wikopedia covers the type briefly, but there is little else available. There are only a few drawings available, which is probably why MMP decided to include the type in its series of publications featuring three view drawings.

The Scale Plans, Fairey Flycatcher No. 70, certainly solves the problem of scale drawings of the type. This series provides a set of very accurate and useful set of drawings in the three major scales, 1/72, 1/48., and 1/72. The only problem is that only drawings appear in the book, with the briefest captions. One photo of a formation of three aircraft appears on the cover, but there is no historical background or data, which means that additional material is required to build a model of a specific aircraft. The drawings are explained to the point of identifying the engines and equipment carried, but there is no markings or color scheme information provided.

At a recommended price of $11.99 USD, this book is certainly worth getting if you have any interest in Royal Navy Aircraft. The Aeroclub 72 kit instructions provide an excellent five view of an aircraft in the markings of No. 405 Flight, HMS Glorious, in 1931, and although I haven’t seen them, I would assume that the other kits provide information on whatever version their kit represents.

This book is highly recommended for what it provides, and hopefully more information is now available on line. It is available from http://mmpbooks.biz. My sources also state that the book is available on ebay and from Walmart, all for $11.99. Get one while you can.

Thanks to MMP Books, and Bill O’Malley for the review copy.

Is it possible to view any of the plans included in the book?  This aircraft is a real classic of it's time and I am certainly interested in making a model of it.