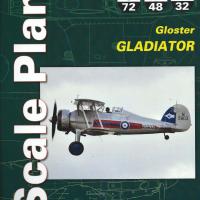 Mushroom Model Publications provided this book for review and we thank them for that.

The Gloster Gladiator holds the distinction of being a “first” and a “last”. It was the first RAF front line fighter with an enclosed cockpit and the RAF’s last biplane fighter. Flown for the first time in September 1934, just eight months before the Germans first flew the Bf109, it entered service with the RAF in February 1937, the same month the Bf109 entered service for Germany. The Gladiator did not last long in the air over Europe and England. However, it did see action around the world in the service of many countries during World War II.

There are a number of Gloster Gladiator kits out there in all popular scales. For the modeler who really wants to zero in on the details of this aircraft, Mushroom Model Publications has released their Scale Plans book covering the Gloster Gladiator in 1/72, 1/48, and 1/32 scales. This 8-1/4” X 11-3/4” soft-cover book contains twelve fold-out pages of line drawings. These drawings depict left side, right side, front, rear, top and bottom views. There are a series of cross-section views of the fuselage in 1/72 and 1/48 scales. All drawings are precise and very detailed.

The first three pages are done in 1/72 scale and show many of the Gladator’s variants including the Sea Gladiator and the Finnish ski version. The next three pages depict the plane in 1/48 scale, but not as many of the variants. Pages 7 to 12 are in 1/32 scale and only depict five variants.

While there are no color pictures or narrative except captions identifying the variants, this book contains drawings that clearly show every panel line, crease, bend or fold that can be seen. If a modeler is looking for reference material to detail a Gladiator, this is the book to use.

Thanks again to Mushroom Model Publications for supplying this item and to IPMS/USA for allowing me to do it.