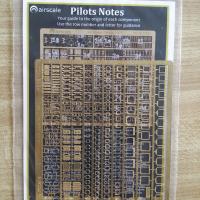 One word of caution – these parts are small, and I highly recommend either keeping a finger on the part as you cut it from the fret, or use some other way of holding the part in place while you cut it off of the fret. The first bezel I cut went flying away because I did not hold onto the part. (I was very lucky in that later on, after I didn’t need it, the carpet monster gave it back!)

The first kit that I used these bezels/assorted parts on was a Hasegawa 1/32 F-16 kit, which is actually a kit of the first Full Scale Development (FSD) aircraft. I kept the modifications to this kit relatively minor, preferring to add a couple of panels to the sides of the cockpit tub, and a couple of ejection seat handles on the early-style ejection seat.

Painting the parts is not hard, and you can use either an airbrush or just paint it with a brush. Another trick that I did not try with these bezels is to use a black Sharpie pen to color them black. Every bezel and panel that I have seen over my career in the U.S. Air Force as a C-130 Crew Chief was black, and sometimes the switches were black or grey.

Test aircraft often have a control panel for whatever they are testing – and these control panels are painted International Orange. Prototype and pre-production test aircraft often have these orange panels that replace the normal instrument or display. An excellent example is the Full Scale Development F-16s, and the F-16XL – they had an orange control panel in place of the production aircraft’s weapons load display. One problem that I had with painting the bezels was that the paint scratched off easily as I cut them from the fret (using a #11 blade). However, that may be due to my incorrectly preparing the fret – I just painted the bezels and parts I needed on the fret, without any preparation whatsoever.

Enhancing unpainted instrument panels can really make the model’s cockpit “pop” out if the bezels are both installed in the correct spot and painted at the same time as the instrument panel. In this case, I simply glued the bezel and panels into place using slow-acting superglue to allow for final positioning.

I completely filed off all of the instruments from the F-16XL kit (from Kangnam) and replaced them with a combination of instrument decals and PE parts from the Airscale kit. While I did not have any direct images of the original F-16XL cockpit, especially the main instrument panel, I did the decals and panels in a similar configuration to a standard F-16 – except for the test equipment panels. These I painted International Orange, which is standard for test panels and wiring. A coat of clear flat followed by a dab of Pledge Floor Finish (PFF) on each panel made them realistic.

As a final test for this kit, I scratchbuilt an entire instrument panel, one that you might find on a cargo aircraft side panel. PFF, decals, Dullcote, and clear glue (for the bezels) got the panel almost completed. The finishing touch for this panel was two coats of PFF on each panel to represent the “glass” of the instrument.

There are other bezels and parts that can also be used outside of the cockpit or flight deck of an aircraft. These are small circular and square frames normally used for dials and display panel edges, but these would make for additional interesting details on the outside of the aircraft. Rear view windows are included to add to fighter aircraft such as an F-105 or F-4.

Using a combination of both instrument decals and these PE bezels really adds to the realism of a jet fighter’s cockpit or the flight deck of a bomber.

A special thanks goes out to Airscale for providing this product for review.

If you have never used PE, but want to give it a try, this PE product is a perfect beginning to adding details through using PE. I highly recommend this product!

Front side of fret