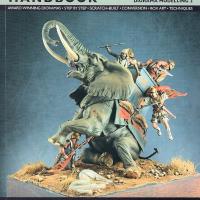 This book uses seven dioramas to illustrate several aspects of modeling dioramas and figures, such as scratch built, conversion, figure sculpture & painting, etc. They book covers several popular modeling scales such as 1/35, 1/32, and 1/24. The dioramas cover many historical periods including Roman Empire, the 17th Century, and World War II.

The book is 8-1/2 x 11 inches and printed on matte paper. There are over 450 photographs. Many are low contrast and printed against a dark background, making it hard to discern details. The color intensity is also fairly low so the colors do not pop out.

The dioramas depicted in this book offer a broad range of eras and settings, and are sure to encourage readers to try some of the ideas. I think the darkness of the photographs detracted from the publication, and the lack of photo captions made it difficult to understand what was happening. The quality of the dioramas are fantastic and sure to inspire modelers.

Thanks to Stevens International for providing the review sample and to Mr. Black Publications for producing a quality publication.