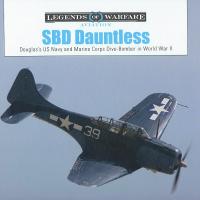 I have been interested in the SBD Dauntless for as long as I have been modeling. In these 20+ years, I have collected any book on my favorite aircraft as I could grab up. For as long as I have been modeling, I have also come to appreciate David Doyle’s excellent reference books on all matters of military subjects and they have become a go-to source whenever I wanted to learn more. The fact that his expertise could be married to the Slow but Deadly in the form of a new book on this truly significant dive bomber makes me truly happy. The fact that the book contains so many photos I have never seen makes things even that much better.

After a brief introduction highlighting the development of the prototypes for the Dauntless, including some clear shots of the XBT-1 and XBT-2, we get chapters that break down each variant of the SBD- the -1, -2, -3, -4, -5, and -6, as well as an excellent chapter on the Army version of the Dauntless- the A-24 Banshee. Each chapter of each variant provides a description of the features significant to each one—including the modifications that were made in each successive model.

The SBD-1 chapter doesn’t show interior images other than the tunnel that the rear gunner would stow the rear single .30 caliber machine gun when not in use. What you do get instead of shots of the exterior from various angles, as well as some excellent color photos illustrating the various paint schemes indicative of the -1, from the initial natural finish pre-war scheme to the change to the light gray camouflage paint of the early war.

The -2 chapter provides excellent close up black and white interior photos of all areas, as well as clear black and white and color images of these models in wartime shots. The chapter concludes with fourteen color walk-around photos of the SBD-2 from the National Museum of Naval Aviation. The subsequent chapter on the SBD-3 follows the same format. Included in both of these chapters are images centering around the Battle of Midway- some known and some new to me.

The next two chapters for the SBD-4 and SBD-5 are mostly relegated to wartime black and white and color photographs, but as before- many are new to me. They provide some definite inspiration for those looking to recreate something out of the ordinary for their model builds. The -5 chapter does conclude with some excellent color photographs of surviving Commemorative Air Force and Planes of Fame Air Museum airframes in flight and on the ground.

The chapter on the Army Dauntless is noteworthy as other than the excellent In Detail and Scale books on the subject, there is not a whole lot of coverage of this variant. While the Army version never received the same accolades as it’s Navy cousins, it was deployed to the Philippines around the time of the Pearl Harbor attack and did participate in combat operations on the Japanese-held island of Kiska, Alaska from July-August 1943. The A-24 Banshee came from SBD-3 airframes, the A-24A from SBD-4, and the A-24B-DT which was based on the SBD-5. More black and white and color photos abound in the chapter, including those operated by France and Mexico. Color photos from displays pf Banshees from Pima Air & Space Museum and the National Museum of the US Air Force in Dayton, Ohio wrap up the chapter.

The last chapter focuses on the SBD-6. Featuring the most powerful engine of the type, it was sadly put into production just as the problems with the dive bomber’s successor, the SB2C Helldiver were ironed out. Only 450 were built before construction ceased- and since the Helldiver offered folding wings and a bigger bombload, the full sized Dauntlesses were left behind. One thing of interest to note in these photos is the presence of wing tanks—which took up the space normally reserved to wing bombloads. We get a treat of color walk-around photos pf the Smithsonian’s SBD-6 to wrap things up, as well as a chart comparing all of the variants.

David Doyle has again done what David Doyle does so well—providing the modeler and naval historian with a thorough photo library of one of the most important naval aircraft of World War II. One cannot deny how vital a role the Dauntless play in turning the tables of the War in the Pacific, and how loved it was by its crews for its ability to drop bombs direct on target and get it’s aircrews home despite damage from enemy aircraft and flak.

I am pleased beyond measure to add this one to my library and am grateful to David Doyle and IPMS-USA for the review sample.