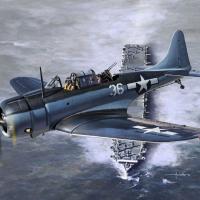 Academy as re-boxed the very good Accurate Miniatures SBD-5 and it has added value to it by providing a mask set and a small photo-etch fret.

Upon opening the box you find 7 plastic sprues -one of them clear-, plus a PE fret for minor details like seatbelts and a really nice mask set to take care of that greenhouse canopy. Please note that the mask set is customized to the open and closed canopy options, meaning you get a full spare set of masks for another SBD in your collection (and who does not have a few of them?). You are provided with markings for 3 Dauntless, one of them a Marine Corps one, with mission tally markings.

Despite the years, the molds hold really well with no flash anywhere to be found and the panel lines remain sharp and well defined.

Construction, as usual starts with the cockpit and you get a full meal there. It is probably one of the most detailed cockpits I’ve seen out of the box.. Full sidewall detail, fantastic radio/radar set, plus a highly detailed rear gunner position.

I assembled most of the interior, painted it, applied a wash and started to assemble the cockpit into the fuselage halves. Please note that there is a specific order in which you are expected to assemble the sub-components. Basically, you get the fuselage sides put together and from underneath you add the pilot seat, radio/radar set, rear gunner seat/machine gun set and finally, the floor goes into place. Instructions are very clear as to the overall order in which to assemble the parts. The floor includes a nice spar which helps to keep things aligned.

Adding the wings is a simple affair. I read other reviewers recommending adding the lower wing first and only glue it to the front and back part of the wing in contact with the fuselage and to not add any glue around the spar. I did it that way and it worked great. The alignment of the wing root to the fuselage was very good, but the seam needs a bit of putty. By the way, make sure you drill the holes in the lower wing to add the Yagi antennas later in the build.

You are provided with separate wing flaps/air-brakes which are pre-drilled. Fantastic molding there! The parts seem to be a tad narrow for the opening in the wings, but if you assemble them deployed, nobody could tell.

Assembly of the nose/engine/cowling was simple too. Just make sure you align parts carefully. Somehow, I managed not to and had to do some trimming on the cowling to make it to fit to the nose section.

The engine itself is quite nicely detailed. I painted the cylinders with Alclad and applied an acrylic wash to show all the cooling fins detail. The ignition wiring was painted black. The crankcase was painted light grey. Careful painting and a wash really bring it to life.

The major painting was done with enamels and my trusty Badger 105 Patriot for the White Insignia and Dark Sea Blue, on top of some pre-shading with black. I lightened the Dark Sea Blue with a bit of Intermediate Blue and hit some areas on the wings and the spine of the fuselage for some modulating light effect. I did most of the painting on the 15-psi range.

For the Intermediate Blue sections on the fuselage sides and rudder, I also used enamels but this time on my Badger 200F and working at 5-7 psi range, with the needle very much in the “closed” position which provided a very fine -and faint- paint pattern.

It took quite some time to build up the color density (as I was painting on top of the Dark Blue) but the tonal variation provided by the darker base adds volume to the look of the model. I did all the light blue freehanded, with just a few paper masks to protect against over-spraying the wings/horizontal stabilizers. At this point, I let the paint job to cure for 72 hrs before gloss coating with Future.

Meanwhile, I started work on using the masks for the greenhouse canopy. Thank you, Academy, for providing them! They are easy to work with, fit the canopy perfectly and are a time saver. It took me about 15 minutes to completely mask the canopy. Otherwise, it would have been a multi-hour affair, probably over 2 or 3 modeling sessions. I painted the canopy first with Interior Green, then with Dark Sea Blue.

I also started work on the weapons and landing gear. Nothing much to report here, just clean up a few mold lines and sand the seams on the bomb’s halves. A good thing here is that the tires are molded independently of the wheel hubs meaning painting is easy (no need to mask the tires).

Once the Future was fully cured, I applied the decals which went down beautifully. They followed all the curves without any issue -after the cursory MicroSet/Sol application. One thing to mention is that some of the stencils that will be applied over the Dark Sea Blue were printed in black. It is virtually impossible to see them. Not sure if the black over Dark Sea Blue is accurate or not.

Another Future coat sealed the decals and an enamel wash followed to highlight all those great panel lines and surface detail. I used a gray enamel wash in the undersurfaces and black on the top/side surfaces.

An antenna was then applied (made of EZ-line) and a final flat coat completed the model.

In summary: this is a high-quality model which, despite being 20 years-old still holds its own with more modern kits. Given some fiddly bits (Yagi antennas, dive brakes, greenhouse canopy) I would say this model is not for a beginner. If you have a few models under your belt you can tackle it and turn it into a great model. Having the canopy mask being provided in-the-box is a great addition.

Highly recommended for the average-experienced modeler.

I would like to thank Academy, Model Rectifier Corp and IPMS/USA for the sample.