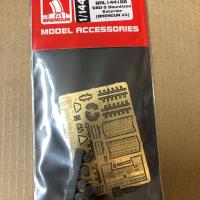 Think SMALL. Then realize PE really does a good job of upgrading one of these kits.

Thanks to BRENGUN for providing (once again) a couple of great upgrades for our use. IPMS USA Sincerely appreciates your support!

The subject of this review is the 24 part PE upgrade set for Brengun’s own SBD-3, along with engine, main bomb, four wheel/tire assemblies, and a challenge to the small builder’s eyesight. I had the basic kit, in a moment of insanity thinking “nice size”. Then I realized it was really small. Almost too small. But Brengun, being experts at this figured out a solution.

That solution being an upgrade set for their own kit!

PE flaps/dive brakes, resin bomb body and PE details for same, Wheels and tires for both land and sea (A-24 and SBD) versions, and a detailed engine.

The PE also included the ignition loom for the engine, which really upped the ante. Main gear doors, antenna and pitot tube, and a few little things like flap actuators and associated meccano in the flap area.

First, prep all the parts, and (in my case) this meant primer everywhere. Second, prepare the model for accepting the upgrades. Instructions are provided on where to cut to install the flaps.

I of course, being a bear in a china shop, cut too much off the wings, but when I folded and painted everything, it all worked great.

I suck at this scale, but that’s ok, because I had fun. I made a dog’s breakfast out of the bomb fins; too much CA and everything stuck where it wasn’t supposed to. That’s why you won’t see the bomb on my model. I did not use the actuator arms for the flaps, because it was already very crowded in there. Really.

The PE engine details worked fantastic and fit right into the cowl. Victory #1.

The wing flaps and dive brakes fit as well, but I missed something on measurement; so much for using the PE folding tool from Meng. I’m sure it’s great, but not my baby on this kit.

The underwing bomb racks (PE) worked well, and the detail for the gear well also fit fine. I figured it was best to install the antennas and tail hook, and the underside engine intake scoop (PE) also in place before final painting.

Brush painting the model seemed best (for me) and I didn’t have too many problems. Glosscoat, decals, and install the prop and spinner.

Highly recommended for future surgeons, and Brengun once again succeeds! Thanks again for the review items!