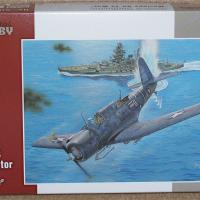 Vought’s Vindicator was designed in 1934 in response to the U.S. Navy’s requirement for a new all-in-one bomber, torpedo bomber, and reconnaissance platform, and was first produced in 1937. Ultimately, the SB2U was more successful as a movie star than a weapon of war, being featured in the motion picture “Dive Bomber”. Vindicators were used by the Marines of VMSB-241 at the battle of Midway, but were mostly ineffective and outclassed.

Special Hobby’s kit represents the SB2U-3 version and comes with markings for for USMC aircraft - three in camouflage, and one representing the first SB2U-3 to roll off the production line, in its pre-war yellow-wing scheme. The kit’s gray plastic parts have really nice recessed panel lines, and I liked the treatment of the fabric areas of the wings, tail, and fuselage. According to photos I have, I think the contour of the rear cockpit sill should be more curved, but it doesn’t detract from the overall appearance.

The interior is built up from a whole bunch of parts and when assembled, looks every bit the complicated maze of structure and components I saw in Internet photos of the Vindicator on display at the National Museum of Naval Aviation

I was a little disappointed, figuring that all my interior work wouldn’t be seen because the canopy is a one-piece molding, and with all its framing, there wouldn’t be much visible through it. Wellllll - I was wrong about that, but not for the reason you might think….read on. I added masking tape belts to both seats.

Once I built up the interior, I had some trouble fitting it all into the fuselage halves, so removed the resin machine gun from its rear cockpit mounting and did some trimming and re-positioning of the cockpit floor. The instrument panel didn’t quite match the contour of the underside of the glareshield.

The wings needed some sanding to achieve a good fit to the fuselage, and the wing roots had to be sanded down to match the height of the inboard wing panels. Special Hobby got the extended horizontal stabilizers of the SB2U-3 version correct in shape and span.

The engine consists of two banks of cylinders and the detail is nice, but the key which aligns the two banks is off - for cooling purposes, each rear cylinder head should be in the “V” directly between adjacent pairs of front-bank cylinders. I just cut the key off and aligned the engine that way. When the engine is placed into the cowling, there’s no alignment aid, so a reference photo is a good thing here to know which side goes “up”.

The oval-shaped cowling butt-mounts to the forward fuselage with next-to-no bearing area. I glued three lengths of styrene to the firewall to support the cowling when it was attached, which let me glue the cowling to these “bearers” for strength.

Little nits surfaced, like a prop shaft on the engine and one on the propeller too.

Once I got the big parts of the kit assembled with all the seams filled and sanded, it was ready for a coat of Light Gray - I chose Tamiya XF-19 Sky Gray acrylic as a close match. To keep spray out of the cockpit, I temporarily tack-glued the canopy in place - and THEN the fun began. The clear part was too narrow, lacking about an eighth of an inch in width and also had some gaps around the windshield base.

The best solution would have been to use the kit part as a master and vac-form a new canopy, but - since these reviews are intended to be as much out-of-the-box as possible, I felt that wasn’t in the spirit of the build, so I sectioned the canopy and tried my “stretching” technique on the parts.

Using two bulldog clips on each side of the clear parts, I applied heat with a hair dryer and gently spread the canopy sections out I’ve used this technique on kits before, and they’ve come out just fine. But noooooo, not THIS one. Now the clear parts were wide enough, but I got all sorts of stress cracks and crazing, and the canopies looked terrible.

Photos of SB2U’s I referenced with their gunner’s canopies opened were a general confusion of frames and a busy look up in there…so I decided what the heck, I’d try to model that look. I figured there was a way to “hide” the rear sliding parts by simply not using them…a little sleight of hand here.

To simulate the large sliding gunner’s canopy in the retracted position, I applied gray decal strip to the inside of the fixed center section, and to represent the triangular rearmost section, I chopped up a Fw-190 canopy from the spares bin and added decal strips to that as well. My “faux canopies” were done and gluing the triangular section inside the other one gave me the “busy” look I wanted. Once I had these canopy parts in place, I masked them off and finished painting the model. I used Tamiya XF-75 IJN Gray (Kure Arsenal) acrylic for my Blue-Gray uppersurface color.

The decals are great. The white is nice and opaque, and the colors are right on register - they all performed just fine with no problems. A neat touch is the faint red centers to the National insignia.

The kit supplies a belly tank and four bombs for external stores. Either I messed something up (altogether possible) or the geometry of the large centerline bomb and its trapeze assembly was off, because it didn’t want to fit on the model per the instructions and look like it was supposed to - the angle is off.

Considering the troubles I experienced with the fit of the parts and the canopy, my patience had pretty much run out by this time, so I gave in and vac-formed the pilots’ sliding canopy in the interest of expediency.

I’m a big fan of Special Hobby kits - I’ve built and enjoyed several in the past - unfortunately, this wasn’t one of them. The canopy and other fit problems just got my goat, and the model turned into somewhat of a chore. To be fair to Special Hobby, though, a friend of mine has the same kit and brought his canopy over - and it fit my model just fine. I can only surmise that I got an orphan from the production line or something. Had I vac-formed a new canopy to begin with, my life would’ve been lots easier and the model would’ve turned out better. But live and learn - it’s a good three-footer anyhow.

Thanks to IPMS/USA, Special Hobby, and distributor MPM for the opportunity to build and review this kit.