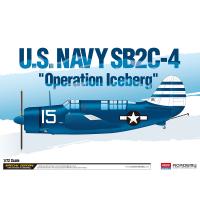 The Curtis SB2C Helldiver was produced to replace the “Slow But Deadly” Dauntless with a larger, faster aircraft. Unfortunately, the plane suffered from many handling issues and a shorter range leading to the nickname “The Beast” being applied by its crews. The Helldiver served aboard carriers for the last 2 years of the war including participating in Operation Iceberg, the Battle for Okinawa.

Academy’s latest Special Edition version includes markings for three aircraft that participated in this operation. A tri-colored plane from VB-3 off the USS Yorktown and two gloss blue aircraft, one from VB-16 off the USS Randolph and the other from VB-84 operating from the USS Bunker Hill.

The kit contains 84 grey parts molded on two sprues, 6 clear parts and 28 photo etched parts for the dive brakes. The molding is very nice with decent panel lines and good interior detail for the cockpits, gear wells, and bomb bay.

There are two sets of instructions. The main set includes paint call outs on the front page including options for Humbrol, GSI Creos, Lifecolor, Testors / Modelmaster, Revell and Vallejo. There are 14 steps for the basic plastic construction shown in easy to follow picture format. The last page has a parts map for the plastic parts and a diagram for the decal stencils of which there are many. The second set includes 5 steps for the optional PE dive brakes and the last page has 3 view drawings showing the paint schemes and major decal placement for the 3 versions.

When I received this kit I was excited because I had recently finished the Airfix Stuka and would be able to add another dive-bomber to the shelves, I could do the kit in a one color scheme which means I could go with my favored spray cans (still waiting to set up the airbrush and station) and the inclusion of PE dive brakes would give me a chance to work with photo-etch for the first time. Well, two out of three ain’t bad.

The Academy Helldivers are recognized as one of the better 72nd scale options out there and I really didn’t have much trouble fit wise. One issue I had was due to packing the two grey sprues in the same bag. The rear gunners seat is molded as the seat pan with two thin struts supporting the rear of the gun ring. Mine arrived with the part compressed. I straightened it and thought I had it made but in attaching the completed assembly to the seat stand, the supports separated from the seat pan leaving me with two very small contact points to try and reglue and little access as the interior was already attached to one side of the fuselage. I went with superglue and thought I had it fixed but there is more to come. Another issue is some injector pin marks on the backs of the main wheels and propeller blades. Some Perfect Plastic Putty took care of those.

The cockpit and gunner’s station are very detailed with separate controls, side consoles, radios and decals for the instrument panel and radio station. I did have a little problem fitting the radio decals and probably should have just painted the details but some Micro-Sol helped settle them down. I did add some tape seat belts to the pilot’s seat.

While the gunner’s station does have some nice detail, there is much that could be improved. The two .30 caliber machine guns have very little detail and the grips are molded together. This could really use some resin replacements. The gun ring could use some PE as could the gun shields. Regarding the top shield, the instructions don’t do a good job showing exactly where this goes and there is no positive alignment for it, just glues on top of the guns. At one point during construction, I knocked off the shield which dropped to the floor and disappeared.

There are two other areas of concern with the build. The tail hook must be installed before the fuselage halves are glued together. This causes a concern when trying to protect the striped decals (which I actually got the decals to work for once) when painting the body of the plane. Yep, you guessed it, the tail hook broke off while I was painting. The other area is the bomb bay which can only be assembled with the doors open. First the instructions don’t show you that there are decals to put on the bombs until you get to the stencil placement on the last page. The bombs are glued to the trapeze with a couple of very small pegs to couple very small indentations on the bombs. I managed to get this done ok. Then you’re supposed to install the trapeze with bombs into the bay and finish by attaching the bomb bay doors which include the bay sides. The problem I ran into was trying to fit the sides past the bombs and get a decent fit to the bay top. I ended up installing the doors first and then forcing the bombs past the doors and seat the trapeze. It worked but was a bit stressful.

The rest of the kit builds fairly easily and I didn’t use any filler in the construction other than on those injector marks mentioned earlier. The wings don’t have the usual tabs but the fit was very good and positive. You do need to cut off the molded-on dive brakes to use the photo-etch versions but when doing my research I was hard pressed to find pictures of the plane with the brakes open. There were a couple showing the lower portion down and I was heading that direction but ran into other issues that stretched out the build and in the end, I decided to go brakes closed to try and get this finished. Those other issues were mostly my own fault but should make great reading so here you go.

I had the plane mostly assembled and a grey primer coat on when I dropped it and split the seams along the forward fuselage so more glue applied to close that back up. I decided on Tamiya Navy Blue for the paint scheme but after it was on it just looked too bright so a full repaint with Model Master Dark Sea Blue. While that was propped up drying gravity intervened causing another drop to the floor and, you guessed it, more cracked seams. There are a couple of wing bomb racks to add. The instructions tell you to drill out the holes before you build the wings. In my hurry to try and get something done on this build I missed that step. So no bomb racks on my bird. The sliding portions of the canopy don’t offer a tight fit so they can be displayed open. This means those of you that like to put the canopy on and mask it before painting will still have to stuff the interior to prevent overspray. Remember my gunner's station that I superglued back in? You got it, came out again when I pulled out the masking. Somehow I managed to get it glued back in. Not sure the struts are back where they are supposed to be but with the glass glued shut, you can’t see too much so I am not going to worry about it. The 20mm wing guns are glued to the front of the wing. While fiddling with the landing gear I managed to knock one of them off to also disappear on the floor. This was too much so I got out the broom and swept an area around where I was working and I guess the modeling gods finally decided I needed a break as not only did I find the gun but also the gun shield I had lost earlier.

The decals went on very well and snuggled down with some Micro Sol. The white is a little translucent but not too bad. Remember all those stencils I mentioned near the beginning? After all the fun I had on this build I decided to just put on the major markings and call it good. It might look a bit better with all the stencils or it might look a bit busy but in this case, I was done.

Overall this was a great little kit with lots of options and if I hadn’t caused so many issues while building it I am pretty sure I would have had a lot more fun. Those of you that want to make one with the wings folded will have a lot more work as that is one option not offered but still a good kit and looks neat next to that Stuka.

Thanks to MRC and IPMS/USA for the review kit.