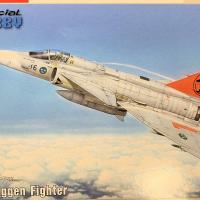 Once known as MPM, Special Hobby is one of the premier model kit manufacturers in the Czech Republic. It is actually a collective of other well-known brands, such as Azur, CMK, Planet Models, and many more. Once known for its short-run kits of esoteric subjects, Special Hobby has now become a major powerhouse in the model kit industry, using cutting-edge steel molds to produce a diverse and well-engineered range of subjects.

Introduced into service in 1970, the Saab Viggen was one of the most advanced combat aircraft of its time, an incredible feat given that the aircraft was developed independently in Sweden. The design was ambitious and bold. It could use its STOL capability to operate from dispersed, short runways only 500 meters long (including local roads), and featured a low landing speed and high controllability in landing, even in high crosswinds. The Viggen was also the first modern aircraft to incorporate canard wings. The aircraft even had a folding tail fin, allowing it to be stored in unconventional spaces if needed; this trait was part of the Bas 60 (Flygbassystem 60, or Air Base System 60) requirement for a defensive force dispersal of aircraft and supporting operations in case of war. Now retired and replaced by the equally capable Saab Gripen, the Viggen stands out as a favorite among aviation enthusiasts as a distinct and futuristic design; many of its elements were incorporated into its successor, evidence of how far ahead of its time the aircraft was.

Surprisingly, the Viggen never got much love in modeling circles. Airfix, Heller, Hasegawa, and Matchbox released Viggen kits of middling quality in the early to late ’70s. In terms of outline, Heller’s and Matchbox’s were considered the best, with the Heller kit being more detailed (and offering the ability to build various versions out of the box), and the Matchbox being the simplest to build. The Airfix and Hasegawa kits were more representative of the prototype. It wasn’t until 2015 that a new Viggen kit became available: Tarangus, a Swedish model company, released a modern, accurate JA-37 kit in 1/48 as a collaboration with Special Hobby. Tarangus/Special Hobby followed up in 2018 with a 1/72 offering.

The Tarangus boxing is a little harder to get – there is no difference in the Special Hobby boxing, other than decals and instruction sheet. This review focuses on the JA-37 variant.

The kit comes in a sturdy cardboard box with attractive box art of a gray airframe sporting a commemorative red tail scheme of Red 10 of Wing F16. In the kit, you’ll find six sprues of gray styrene and one clear sprue. You’re going to wind up with a lot of spares as the molds contain all the parts needed to build other variants, save the two-seater SK forward fuselage and different noses. Before starting on the kit, I recommend the following:

Construction is fairly conventional, starting with the cockpit. The seat is fairly detailed and is a decent representation of an RS-37 seat (incidentally, RS stands for Raketstol, or literally, “rocket seat”!). I used masking tape to add some seat belt straps to breathe more life into the part. The kit also includes rudder pedals, which are a little thick for scale but will not need replacement as they are barely visible. Sidewall panel parts J23 and J37 should be the same shade of gray as the cockpit, with black dials and buttons, instead of black as indicated on the instructions.

This kit has the option of installing the RAT (Ram Air Turbine). Special Hobby makes a resin set for this, but it’s so small it might not be worth the effort to buy it. I ended up using the kit part. You’ll need to open up the door, so precise cutting is necessary. It’s a very delicate assembly, so save this part for last.

After the cockpit, paint the wheel wells of the nose and main landing gear. This is because the surfaces of the well are flat aluminum, but the sidewalls are gray. Doing this now will save a lot of bother in the long run.

I suggest deviating from the instructions at Step 11 at this point and leaving out the turbine blade (part A5) for now, as you want to make sure that the fuselage seams are cleaned up, and will be easier to do this before mating it with the aft fuselage and intakes:

The reason for adding J3 so early in the build is that this piece and G2 act as a bulkhead. This will reinforce the forward fuselage halves when you clean up the seams, preventing the fuselage from flexing and cracking at the seams.

Once the forward fuselage assembly is complete, continue with installing the burner can and petals. The instructions miss it, but the lower portion of the exhaust interior is on the upper half of part C2, between the flaps, and will also need to be painted burnt metal like the rest of the exhaust.

Once this sequence is complete, the wing root no longer needs to be sanded. Additionally, you will no longer have to measure and cut spacers out of sprue to bulk up the fuselage cavity, thanks to the fuselage plug. You’ll also notice that the entire airframe is now very rigid, and there is little chance that a seam will pop. This is a testament to the clever engineering that went into this kit.

Assembly as this point is straightforward. There are some very small bits prone to being broken off, such as the canard flaps, airbrakes, antennae, and some small vents on the base of the tail fin, so I advise leaving those out until the last moment. With all of the major components assembled and the canopies marked, one can move on to paint.

Alongside the attractive box art of the valkyrie on the red tail of Uppsala Wing F16, the kit also had markings for a plain gray aircraft from F4. The third and final option was the distinctive splinter camouflage scheme of Red 12, also from F16. I had a hard time deciding, as the gray scheme is very purposeful and looks fantastic on the Viggen, but the splinter scheme is unique to the Viggen, and the day-glo numbers added a huge splash of color. Painting ended up taking a few weeks as I opted to mask it by hand, spraying one of the colors, masking the shapes, and repeating the process three more times for the other colors. The masks were then removed, in order to inspect my work and make corrections. In hindsight, this was a frustrating and painful way to do it. A less aggravating path would have been to purchase a commercially available masking set or to make my own by scanning in the instructions, scaling it by a factor of 1.6014, then cutting frisket film out of the shapes to mask accordingly.

The decals were a little thicker than expected and surprisingly fragile. The day-glo numbers did not react well to Solvaset and turned into white splotches. I ended up having to repaint the affected areas, using Testor’s International Orange.

The landing gear is extremely delicate and took some planning to put together. The landing gear struts are gray (I used Vallejo gray primer, which is Light Ghost Gray), but some of the actuators are natural aluminum, and others stainless steel.

I used two shades of metallic paint, but in the end, the differences were so subtle that they all but blended together under weathering. I found that it was best to paint the landing gear pieces separately, as there would be some areas (like the oleo) that would be hard to access because the oleo scissors are in the way. I found these steps to work best:

Having fun yet? I seriously recommend investing in a pair of Opti-Visors for this part. Also, have a good pair of needle nose tweezers as these are really tiny parts. One of the main landing gear actuator struts attaches to the main landing gear strut too, so at the end you’re going to have a very busy wheel well.

The final challenge to this kit was installing the navigation lights. The port and starboard light covers were very small pieces, and some trimming needed to be done as I found that the area where the lights fit on the wing needed to be trimmed with a file because the mating surface was not 90° in the corner. I wonder if the navigation light assembly could have been better engineered by tooling part of the wingtip in clear plastic so that the builder would have an easier time attaching it to the wing and also eliminating the gap between the light cover and wing.

The model’s top and bottom lights were also very small. Due to their teardrop shape, I couldn’t just use a scrapbooking embellishment gem from the local craft store. In order to keep the part clear, the sprue attachment point was molded below the light as well, so cutting it risked the part falling out and bouncing off somewhere. I found the best way to separate the part was to use a thin razor saw to slice out the attachment from below. I then stuck the pieces on a piece of double-sided tape, painted the lights red and attached them to the aircraft when dry. Once the fiddly bits were installed, I added the RAT and nose pitot, and I was done!

After two and a half months of pain, much of it self-inflicted in the paint department, the Viggen is finally done. It does stand out in the display case among the other aircraft. It’s a superbly engineered kit, but can be a bit frustrating due to some very small and fragile parts. I believe the oleo scissors would have been best served as photoetch sets, as they would be tougher than the kit parts and more detailed. However, this is a very minor complaint against an otherwise excellent release. I’d recommend this kit to the intermediate modeler. Just make sure to plan ahead and have a lot of appropriate tools for the smaller parts. Many thanks to Special Hobby for the opportunity to review this excellent product.