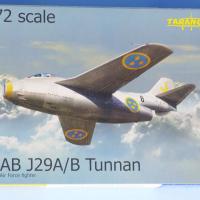 This is the first 1/72 kit by Tarangus, and follows their 1/48 SAAB Lansen A-32A and J-32B kits. Despite being a limited run kit, this is a major upgrade over the previously available Tunnan kits (Matchbox, Heller) and obviously the first as a J-29A or B. Of course the increase in accuracy does not correspond to an increase in buildability. I sincerely hope that Tarangus will expand this kit to do the later Tunnan versions. Hopefully the kit does well and we will soon see the reconnaissance version, S-29C, along with the later J-29E and J-29F with their distinctive dogtooth wings.

The Tarangus kit is packaged in an end-opening box with a J-29A on the top and profiles of the three decal options on the back, all in color. All parts , instructions and decals are in zip-lock bags. The instructions provide a parts map, which is critical since there are no part numbers on the sprues. Basic colors are called out in the instructions along with drawings to point out stencil placement. A great touch is that the resin and clear parts are protected in their own small bags. Tarangus does provide some nice options. The first is a heat shield fitted to the exhaust nozzle of some Tunnans – check your references. The second is the retractable landing lights mounted under the nose. This module is nicely presented in clear plastic. The third is the separate canopy that allows the cockpit to be properly displayed. Under wing drop tanks are included as well.

The resin parts had no noticeable air bubbles and the clear parts are well done. The grey injection parts smartly done with fine recessed panel lines appear to be done well although there was some flash present. Although the sprue gates are fairly small, some of the parts are even smaller and the plastic is somewhat brittle. If found out that my normal pair of Xuron side snips were not up to the job and proceeded further with photo-etched saw blades to avoid having the sprue gates take some of the part with them.

So what’s missing? The biggest item is the harnesses for the nice resin seat. If that’s a big deal for you, you’re in luck as Maestro Models has issued a nice color 32-piece photo-etch set (MMP7229) that addresses that concern.

Overall the fit is quite good for a limited production kit. If you have had experience with MPM, Special Hobby, or Sword, you know exactly what you are getting. Since the intake, exhaust, wheel wells, and cockpit all have to be taken care of before closing the fuselage, that’s where I started. The cockpit is fairly well detailed with a the cockpit floor, rear bulkhead, side panels, instrument panel, rudder pedals, control stick, and a resin seat. The instrument panel is actually quite nice with multi-layer detail. There is also a nice resin gunsight that only requires a small piece of clear acetate to be cut for the reflector. I saved the resin seat for last since it can easily be secured later in the build. Be sure to remove the pour plug though or she will sit high. There is a bit of a shelf on the starboard fuselage interior for mounting the cockpit, but curiously not one on the port side. You will need to remove the pour stub to line up the cockpit though. Be sure to fit properly or your cockpit will be leaning. Overall I’m very happy with the stock cockpit; it looks plenty busy in this scale.

The nose fairing will need to be secured to the resin intake which of course will require your favorite superglue. You’ll need to be very careful here in test fitting. If you don’t center the intake properly it will cause out of alignment problems once secured in the fuselage. Next up are the resin main wheel wells. Again you will need to be careful to remove the plugs on their back, otherwise there is not enough room in the closed up fuselage. You will also want to make sure that you test fit as there is a very real opportunity to make your Tunnan sit lopsided once the main gear are installed. Next up is to fit the nose wheel well. Once again there are no guides, so test fit, test fit, test fit. Since this is a tail sitter, be sure to place some lead weight in around the intake in the nose. The instructions don’t state how much is required however. Hopefully it won’t affect the nose strut. I started gluing the fuselage from the nose back to make sure alignment was maintained. Finally, I inserted the exhaust and glued the rear fuselage.

Interestingly, the four gun ports are separate parts that mount on small platforms on the nose. I feared they would be an exercise in futility, but they actually went on fine. The gunsight was superglued on and the windscreen was secured with Future acrylic.

Next up were the wings. I built a Lego fixture to assure alignment of the wings and horizontal tail. All moveable surfaces are molded in place, but the detail is quite nice. The lower wings have small indentations for locating the underwing pylons. Since I like my aircraft clean, I filled these in with Milliput epoxy. At this time, I drilled out the holes required for the pitot tubes. If you’re into loading out your wings, the pylons do fit well and the tanks are a simple assembly. The horizontal tail is a one piece slip on part that nicely detailed with recessed panel lines. The main landing gear are well detailed, but will require seam cleanup. I would have preferred a separate nose wheel, but the injected part does the job. The main wheels are split into halves and connect well with nice wheel/ brake detail.

Once I mounted the wings and horizontal tail, I glued on two dorsal intakes and the dorsal antenna. One concern that gave me fits was the vertical fin that was a bit warped. I had tried several methods to straighten it out without complete success. I checked out three other kits in my collection, but they did not appear to have the same fin problem. I mounted the nose wheel and the main gear struts next. After sitting for a day, the main gear wheels were installed. Make sure to look at your photo references, as they are not perpendicular to the tarmac. Once set, I installed the nose gear doors and the main gear doors.

The final bits were installing the resin seat, the wing pitot tubes, and assembling the sliding canopy. I’m not quite sure what Part 4 is called, but it is secured to the inside rear of the canopy with a couple touches of Future acrylic. The smallest part, the tail bumper was installed next. Be sure you don’t throw it away with the spures!

I base coated the model with Tamiya Light Ghost Grey. The metallic finish is with Tamiya Aluminum. All of the detail parts were painted kit with Vallejo acrylics. The cockpit is painted with a variety of dark greens. The tires are painted Panzer Dark Grey, the wheels Russian green over steel. The exhaust was washed with dark brown. Decals were added over the next two days, starting with the roundels and proceeding to the stencils. The decals nestled down well, but I did use Solvaset just to be sure.

The decal options include:

I pursued the first option and all went well until I broke the port wing off. The only reason I mention this is you may want be sure to assure that your wings are securely mounted. On my next stab at this kit, I am looking to add additional support for the wing to fuselage join.

Keep in mind that this is a limited run kit. Internet chatter confirms that this kit is easily the most accurate Tunnan available, especially in the forward fuselage / windscreen area which is readily apparent. Tarangus has announced a 1/48 Tunnan is in the works and I can’t wait for it. Although I’m not happy with the wing fiasco, that is clearly more my issue in securing them than anything else. Otherwise I am elated at having the ability to build an accurate early Tunnan and look forward to building three more 1/72 early J-29s! Highly Recommended!

My thanks to Tarangus and IPMS/USA for the chance to review this great kit.