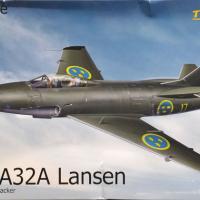 Saab has been a Swedish company for a very long time. The Lansen was one of their earlier developments in the jet age, its first test flight occurring in 1952. The A32A version was specifically designed for ground-attack and maritime-strikes. 287 aircraft were built between 1955 and 1957, and the airframe was not retired until 1978.

Tarangus is a Swedish company specializing in Swedish aviation. Founded in 2009, they have already started a tradition of excellent kits and attractive subjects. The kits are limited run injection molding and are flash-free with excellent engraved panel lines. There are two versions of the Lansen kit available. This review is for the A32A version. The kit comes with 3 gray sprue, a clear sprue, and two resin seats. The panel lines are very well done. Be aware that this is limited run, so there are no connecting pegs or the like. It is a great limited run kit to start on if you have never built one before, as the fit is quite good.

Construction starts with the cockpit which is nicely detailed, being built in 8 pieces plus the ejection seats. The kit comes with decals for the instrument panels which are very well done. The cockpit builds well OOB. One little issue here, the color call outs are very generic. Some time on the Internet and conversations with people who are more knowledgeable than I am got the colors sorted out, but it would be great to have FS numbers and specific paint manufacturer call outs. The cockpit interior is cockpit green, a middle green color for the panels, and an aluminum tub. There are excellent call outs for the black and other colors detailing the cockpits. There are no rudder pedals. Since this is a two-seater, there are two cockpits to deal with and both turned out well. The seats were left out until the end. The nose gear bay is also attached to the bottom of the front cockpit and it was assembled.

Before closing the fuselage, the interior of the intakes are built along with the exhaust. The exhaust is pretty basic but fits well. It could use some detailing to look more representative. The cockpit has ridges to add to the fuselage and fits well. Since there are no locating pins, take your time and align things starting at one end. I had a slight mismatch towards the front which was easily sanded off. I used Tenex and held the fuselage together with tape and let it dry overnight.

While it dried, I turned my attention to the wings. You have the option of adding 12 under wing weapon racks which will need to have the holes drilled out. I elected to leave them off as I liked the look that way. The main gear well is added also, but prior to adding it, I filled a large ejector pin mark and rescribed the lines which was easier to do prior to assembly. The top wings were added along with the wing fences, and pitot tube which I made from tubing. The wings were then added to the fuselage. This required putty in the front and back and time was spent squaring the wings. Putty was required in a few places on the fuselage, as well as on the front and back of the wing joints. Putty was also required on the tail to feather it in at the bottom. The horizontal stabs were added and everything given a final sanding. I added the radome to the bottom at this time.

After reading several reviews, I decided to add the coaming and windscreen prior to actually painting due to the possibility of fit issues. The coaming required some trimming but did fit. The canopy was masked and did not fit well. Repeated trimming got it close but several rounds of putty and prime were required for a good fit.

There are two similar marking options - natural metal undersides with Olive Green tops. The natural metal was based on decanted Tamiya rattle-can TS-17 Gloss Silver. The top was painted olive green which is close to FS34079 from Xtracolor. This was set aside and allowed to dry for a couple days. I elected to build number 32177 29-F15 Söderhamn in the “68 Squares” scheme. The decals were next and went on well. The yellow squares were a bit transparent. If I had a second set, I would have doubled them up for more opaqueness. There is also a full complement of stencils in addition to the larger markings. All snuggled well with a little encouragement from Mr. Softer. I gloss coated the kit and washed the panels lines with Flory Model's black. This was wiped back and the entire top flat coated. I did not apply flat coating to the metallic portion. I also wanted a relatively clean model.

To finish off the kit, I needed to assemble the landing gear. The gear and gear doors were all coated with TS-17 silver. The wheels were painted and added, and the gear and doors installed. The seats were prepared and painted. I added seat belts as none were included in the kit. The canopy and various interior bits were also prepped. The Lansen has a windscreen in from of the rear cockpit as well as glass on either side of the ejection seat. Add the seats first, and the glass sides will slip right into their locations. The canopy was added last. This is problematic in that the instructions do not show how it opens. It is such a nice cockpit that I didn’t want to close it. A couple pics were found with it opening on the left side so I glued it in place open.

So, lots of fun to build, and except for the windscreen, a good fit. It is also a very large plane – like an F-86 on steroids. This is a great kit for modelers wanting try a limited run kit, and for fans of the Swedish Air Force it is a must-have. It is a superb start for super detailers. Maestro Models (https://www.maestromodels.com) sells photoetch sets including ladders, FOD guards, cockpit sets, etc. for detailing the kit. Definitely a recommended build.

My thanks to Tarangus Models and IPMS/USA for the chance review this kit.

Overall view from the front-left side.

Overall view of the right side of the aircraft.

Closeup of the cockpit - note the aftermarket seat belts.

Closeup of the cockpit.

Overall view from aft-starboard side.

View of right side of aircraft from just above wingtip.

Closeup of detail on aft-top of fuselage.

Nice closeup shot of cockpit, opening to the left of the aircraft.

Overview of the underside of the aircraft.

Closeup of the underside of the exhaust.

Closeup of the gear.

Closeup of the very nice decals on the tail of the aircraft.

Overview from above-right, showing off the nicely opened canopy.

Closeup of the exhaust.

Closeup of forward of the aircraft.
Previous Next