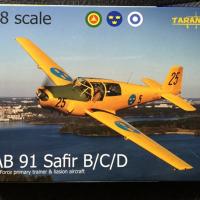 Seeing the end of WWII in sight SAAB decided to design an aircraft for the civilian market. That design, the Safir (Saphire), started as a three seater with a 147 HP Gipsy Major X inline engine. Subsequent versions had horizontally opposed four cylinder engines of 190 HP (B/C version) and 180 HP in the D model. The chief designer A.J. Anderson had previously worked for Bucker hence this aircrafts strong resemblance to the Bestmann trainer. The Safir was purchased by several air forces. The subject of this build is a SAAB 91D model operated by the Finnish Air Force, one of ten D models purchased by Finland. Several were purchased for the civilian market. A total of 323 Safirs were built.

Specializing in short run kits of Swedish aircraft, Tarangus has produced some one off subjects including this aircraft that hasn’t been done before. The kit is packed in an end-opening box with a nice photo of a Swedish Safir on the cover and a color/decal guide on the back cover. The kit provides parts and decals to build three different Safirs operated by the Swedish, Ethiopian or Finnish air forces. Inside are two trees of light grey sprues and one clear. The instructions are a small booklet with a brief history, six pages of assembly instructions and a decal placement guide for the stencils on the back. This kit has very nice surface details. The real aircraft has metal covered wings from leading edge to the main spars, behind that is fabric. This detail is well done on the wing molds. The cockpit is well detailed and that’s a good thing because the canopy has a lot of area to see it through. Speaking of which, the canopy is a single part with very distinct framing that’s easy to mask for painting. The color call outs are very generic but it’s not a problem with the exception of the Swedish yellow. I’m not sure where you would get that color. It looks impressive out of the box lets so how it builds up.

Since this a short run kit, I decided to dry fit the major assemblies and I’m glad I did. The canopy is too wide for the fuselage halves if you assemble the kit out of the box. I made plans for inserting some plastic card to make up the difference. The only other area that needs some work is the wing trailing edges that appear too thick to my eye. I sanded them down before gluing them. The rest of the construction is straight forward starting with the cockpit. You get a filled-out interior including instrument panel, controls, seats, control sticks and a handle that could be for flaps or brakes. There’s a pillar that extends up to the central panel that you attach to the underside of the canopy. The underside of the cockpit floor has parts to box in the main gear wells and a separate nose gear well box too. No seat harnesses are included so I made some from wine bottle foil. It would have been nice to have some instrument decals for the panels. I didn’t have any on hand so I dropped some black in them. Be sure to select the version (B/C/D) you are building beforehand as they are not all the same. The B/C model had a fuel tank behind the pilots seat. The D version has four seats. If you choose the D model, I would recommend not installing the rear seat until the fuselage is joined and you’re sure the canopy will clear it. As I mentioned before, I had to widen the fuselage with plastic card fillers to make sure the canopy sides would flush with the fuselage. That meant putty and sanding work to make a nice transition. I also needed putty at rear of the wing/fuselage join. Don’t forget to weight the nose down or you will have a tail sitter. With all the joints filled, sanded and panel lines re-scribed, it was time to paint.

I chose the Finnish Air Force version because of the day glow accents. Tamiya rattle can paints were used throughout. I started with Tamiya TS-30 “Silver Leaf” for the overall airframe. After masking off the areas shown on the back of the box I used Tamiya TS-36 “Fluorescent Red” for the day glow panels. You’ll have to build this color up in layers until the color density you want appears. After letting the TS-36 gas out a few days, I masked and painted the antiglare panel on the cowling with Tamiya TS-6 “Matt Black”. No gloss coat is required because these paints all have at least a semi gloss finish when dry. The decals were a real pleasure to work with. They separated quickly from the backing paper (always a good sign) and settled right into the surface details. The larger markings are on the illustration on the back of the box while the stencils are on the back of the instructions. The finishing details require a bit of work too. There are vague location holes for the landing gear, prop and other details. That’s pretty typical of short run kits. There is a pitot tube (part 29) that’s not shown on the instructions. In reality there are probes at both wings tips. I made them out of hollow tube I had on hand. Also, the trim tab on the aileron is shown on the left wing on the box but it’s on the right in the instructions and the photograph on the box front. In order to fix that you would have to remove the molded tab and make your own, I didn’t correct it.

This kit was a bit more work than some but being a short run effort and the only kit of this subject, I didn’t mind taking the time to build it the right way. I wouldn’t recommend it for a beginner but anyone with basic skills at closing seams with plastic and putty should do fine. The base product is very well done. High points are the cockpit, surface details, canopy clarity and the decals. Low points the oversized canopy width and the lack of seatbelts in a cockpit that’s highly visible. A little basic modeling makes up for the low points. I love kits of subjects that haven’t been done before so this one makes a nice addition to my collection. Taking the short run nature of the kit into account, I would give this model a 9 out of 10. Thanks so much to Tarangus for the sample and to IPMS for the opportunity to build it.