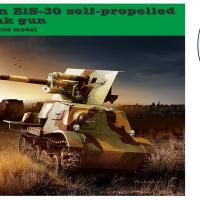 This is a new one to me; a Russian subject produced by an Irish company and manufactured by a Chinese company. Corporate politics are beyond me.

In any case, what we’re dealing with here is a conversion of the ubiquitous and trusty little World War 2 Komsomolets artillery tractor into a tank hunter, mounting a hugely oversize 57mm gun. Apparently only about 100 of these were made and used in the defense of Moscow. I’ve always been a big fan of little tanks, and this one certainly fits the bill. Never having made a model from Mirror Models, I was interested in the challenge and wanted to see what this was made of.

First off, I must say that for a finished model that is only a little over 3 inches in length, you certainly get a full box of plastic – well over 500 parts including photoetch and almost 200 separate track links. There are no figures or ammunition supplied. The parts have been rendered in a relatively soft gray plastic that is easy to work with. Although the parts are numbered, there is no logical sequence of numbers and the parts appear to have been placed on the sprues wherever they would fit, which creates some frustrations during the elaborate assembly. The instructions are on a series of loose pages filled with chatty bits of modeling advice, some of which is not particularly helpful. However, for the most part they are clear enough if you read them carefully.

One of the interesting things about the assembly in general is a virtual absence of any alignment points. Some parts have extremely shallow mounting pegs whereas others have a miniscule pin-and-hole arrangement where the holes are more tiny dimples than holes. In the main, you will want to cut off the pins, which although small are still too big for the corresponding dimples. Alignment by eye is your best bet.

Observing the huge number of parts dedicated to the suspension, I elected to bypass the suggested assembly sequence and start with the tough stuff first. I did a quick assembly of the basic chassis and spent some time cutting out and cleaning the track links. Surprisingly, this took less time that I anticipated – about a half hour. Because of the forgiving plastic, not a single link was lost to the Carpet God, which is a first for me. I then assembled the bogies, which constitute 14 pieces each and involve some parts no bigger than a fingernail paring. The separate rear wheels are mounted on adjustable pintles, which do not have a definitive location, so your best bet is to attach the finished bogies and adjust the rear wheels to match their protrusion from the side of the hull. Again, because of the plastic, no pieces were lost or mangled, although it reminded me that I might have had an easier life doing brain surgery if I’d planned ahead.

Track assembly proved quite easy, as the links go together without fuss and feature some very fine open teeth – quite nice on the finished model. That being said, the instructions suggest you apply the treads to the top run first and go down to the ground from there – the exact opposite of what I normally do. It’s been my experience that the top run is usually the most forgiving area if the treads are a bit too long. You can always add a bit of slack across the return rollers. So I started as I usually do with the drive sprocket, ran down to the ground run and then back up over the return rollers, finding no difficulty with this procedure. Although the kit suggests each run should be 78 (or 77, depending), I found that mine ran to 79 track links per side, leaving about 40 spares.

Running through the rest of the assembly, I was challenged by the sometimes vague instructions, which reached a crescendo during the gun assembly. Some part numbers were omitted altogether on the plans, and in one instance, two parts on the sprue were given identical numbers (X35) so caution is a must. Delving further into the work, I began to wonder if the kit designers at Mirror were paid by the part, for there were times when an item that could easily have been molded as one piece without loss of detail was comprised of up to six or seven parts. Even so, putty was needed on only a few spots excepting the cabin roof, which for some reason was a bit undersized on my sample. I drilled out the headlights so I could add aftermarket lens, but otherwise the model is essentially straight out of the box.

I’m sorry to say that all the fine detail work on the engine and interior is completely hidden on my finished model. I’m not sure how they accessed the engine on the real thing when the gun was mounted, but it must have been frustrating. The final assembly amounted to about 430 parts, leaving over 70 parts including alternate versions. Still, that many pieces for a model a little over 3 inches is more than enough. Despite the frustrations with the endless part count, random sprue numbering and vague instructions, I am very pleased with the final result, which certainly looks the part. A note here, though – despite the positioning of the gun on the box cover, firing this thing at anything but a slight angle from directly ahead would, I suspect, bowl the entire vehicle over. It’s a VERY big gun on a small chassis. Steven Zaloga’s review of this same kit notes that the real Zis30s were mounted on the final, definitive version of the chassis, which this kit does not provide, but the detail differences appear minimal to me at best.

Just to give some idea of the size of the model, I’ve included a picture with a Russian sniper and a quarter, as well as another picture of the vehicle beside a Polish TK-3 minitank and French Renault UE in the same scale.

This model took me considerably more time than usual to assemble due to the high part count and other minor inconveniences, but it is still quite a fun build and certainly makes for an interesting inclusion into any WW2 Soviet armor. I recommend it to any modeler who likes a bit of a challenge.

My thanks to Mirror Models and IPMS/USA for the opportunity to tackle this feisty little vehicle.