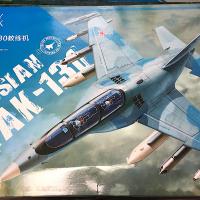 Introduction: This kit was released at the end of 2018 and features resin crew figures, photo etch details, and marking options for seven jets, including two from Russia, one from Bangladesh, and four company demo aircraft. There are almost more sprues of weapons then there are of the actual aircraft, included are Kab-500kr, Kab-500Kl, Kab-500se, Kab-1500-Kl, Kab-1500-Kr, Kab-1500-se, KH-29L, KH-29T, KH-31, KH-58, and three versions of the KH-25. It’s almost worth buying the kit just for the weapon sprues! The kit looks impressive in the box.

Construction: Construction starts with the seats and I intended to use the photo etch harness on one and the resin pilot on the other. The PE seatbelts seemed to be a bit too big and ended up looking awkward when I had it done. Also, the seat fits so tightly to the cockpit that there was not enough room for the belts to hang over properly, so I ended up removing them. The cockpit looked great after painting and weathering and the nose wheel can be left off until the end which was nice. The next 9 steps get the air intakes and main gear bay installed and the major construction.

I followed the instructions and found that while everything needed to be massaged a little, a good fit could be easily achieved. The only area I was not very happy with was a bit of a step where the lower fuselage meets the nose section. Fortunately, the gun pod covered it up well. I also noted a mold part line running along the lower fuselage that had to be carefully sanded out to avoid obliterating detail. Sanding sponges worked well here. The flaps and control surfaces went on with no trouble, but the landing gear was a bit fiddley and weak, although it supports the weight of the model and as a plus, no nose weight is needed. Canopy glass was very clear but there is the usual seam line that will need to be addressed. The canopy can be posed open or closed. Gear doors and tiny antennas complete the assembly.

Decals: This was an area of disappointment. The decals went down ok and responded well to Micro Set and Sol, but the artwork was incorrect. The wing walks in my sample were both handed the same direction as were most of the intake markings. The instrument panel decals were one piece, but there is so much depth in the panel that they were usable. I ended up cutting the decals up and individually laying the elements I wanted to use. My decal sheet did not match the plan layout in the instructions, but even that layout has errors in the walkways.

Summary: My overall impression of the kit is good. It is an interesting subject, has plenty of marking options, more weapons than you could ever use, it fits together well ,and has fantastic detail in the cockpit and wheel wells. On the downside, the kit required plenty of dry fitting, especially around the intakes and fuselage assembly, and the decals had errors that could not be overcome on some of the markings. Overall I would recommend the kit, because if care is taken a great result can be achieved! I would like to thank Kitty Hawk and I.P.M.S. for giving me the chance to build this one!!