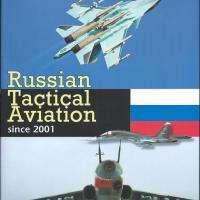 Growing up during the Cold War which encompassed the red scare and fight against global communism, photos and information on aviation in the USSR was pretty skimpy! A short video of a plane flying over a parade in Red Square or a few grainy, slightly out of focus black and white photos Were all there was. A little bit more was available on export models as they were used by Soviet Client states and thanks to the September 6, 1976 defection of Viktor Belenko flying his Mig-25 to Japan a bit more was available on that aircraft.

Since the fall of the Iron Curtain and communism much more information is readily available to the modeler and aviation historian on Russian aviation designs and tactics. The authors are the go to folks for this information. I have had the pleasure of reviewing several of their books and like past volumes, this one does not disappoint!

The book covers the Su-24 Fencer, Su-25 Frogfoot, Su-34 Fullback, Su-35 Flanker, MiG-29 Fulcrum, MiG-31 Foxhound, MiG-35 Fulcrum, Mi-28 Havok, Ka-52 Hokum, and Yak-130 Mitten use in tactical aviation by the Russian Air Force. The sheer bounty of color photos of these aircraft are a sight to behold. A highlight for me is the excellent photo coverage of the Sukhoi T-50 fifth generation multi-role fighter. One would have never come close to such high quality photos of a prototype during the days of the USSR.

The book also covers the support of the Assad government in Syria as well as combat with Georgia. Also included are the losses of aircraft in Turkey and the aforementioned combat in Georgia. The color pictures are augmented with combat camera photos as well.The authors give thorough coverage to the combat training of Russian pilots as well as the rebuilding and upgrading of equipment and systems, the various units and the current equipment they are using.

This is a very good book! The authors really know their subject and do an excellent job of communicating that knowledge. The photos and color profiles are gorgeous. The amount of good color photography is a great help to modelers! They will keep the modeler busy and inspired for years to come! If you have any interest in modern Russian tactical airplanes and helicopters you will want this book!! I strongly recommend this book to all! The book is available from Specialty Press at the link above or by calling 1-800-895-4585, $6.95 for shipping!