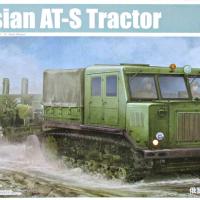 Trumpeter continues to produce a wide range of interesting and wide ranging Russian subjects. While the box says that this is the Russian AT-S Tractor, in fact, this is a two-in-one kit. Also included with the prime mover is the Soviet ML-20 152 mm howitzer Mod 1937. As with most Trumpeter kits, the box is sturdy and the sprues are individually packaged and the more fragile parts are wrapped in foam. For the prime mover there are twelve sprues, including four for the individual track links, one sprue of transparent parts and a small PE fret. There are markings for three vehicles, Russian, Finnish, and the German Democratic Republic. For this build, I chose the Finnish markings. For the artillery piece, there are nine sprues, two PE frets, a set of rubber tires and a metal gun barrel. As with most recent Trumpeter models, the parts are well molded in grey plastic, though there is some fine flash and mold lines present on the parts which take some time to clean up. While this a prime mover combination, the artillery piece is so sweet, I elected to build them apart rather than the vehicle towing the gun.

I will start with the prime mover. Assembly begins with the lower hull and suspension. From the instructions, the assembly is straight forward. Follow the instructions carefully. I am not sure why, but two of the trailing arms for the suspension is shorter than all of the others. When you look at it straight on, you find that the wheels are slightly askew and don’t lie flat. Curious. The cab is next and it is nicely detailed. Trumpeter is notorious for inconsistent interior color call outs. Not with this prime mover. In the various full color profiles that are included, it has a full color illustration of the interior. Looks great and I am glad that they included it. That being said, there are some parts (D1) that line the windshields,that are very thin and difficult to remove from the sprue without either breaking them or losing them to the carpet monster. Also, pay close attention of the orientation of steering levers on part A11. It is far too easy to assemble them upside down (as I did). You have the choice of two hoods depending upon the variant you are assembling. The primary difference is that one has more lights than the other. The last sub-assembly is the bed. The assembly is straight forward. Beware of the small cleats (D15). They are very small and easy to lose. It brings up the question, just because you can mold it in plastic, is it worth it?

As with most armor kits these days, the individual track links was the most tedious part of the entire build. They have to be separated from the sprue and individually cleaned up. I elected to assemble the tracks to the road wheels first before priming them in black. Once the tracks were assembled and primed, I glued the bed on first, then the cab. After dry fighting them, that seemed like the best way to assure a tight fit to the chassis. Unfortunately, I lost the windshield wipers to the carpet monster.

There is very little in the way of decals to put on. As mentioned earlier, I chose the Finnish variant. I like experimenting with different shades of green when it comes to building Soviet vehicles. For this build, the instructions called for a lighter shade of green. When comparing it to the various shades of green that I had in my collection (almost all Tamiya paint), NATO Green (XF-67 seemed to be the closest. The tracks were first painted black and then a light coat of Tamiya Dark Iron (XF-84) with some dry brushing of metallic grey.

Since this a paring of two kits, Trumpeter has included a second instruction manual and painting guide. The instructions are clear, but beware, there are many pieces that are very small and fragile and need to be removed from the sprues with care. The main carriage is the first sub-assembly followed by the two legs. Pay close care to the instructions. There are some slight differences if you choose a towed piece or an emplaced piece. I chose the deployed piece, but with some variations. I would like to think that the crew just deployed the gun, but had not fully emplaced it, so the spades that anchor gun have not been deployed. Anyway, the basic carriage assembly is very straight forward. The most difficult part of this build was the photoetch. The gun shield has to be attached with photoetch braces. Suffice to say, I am not a fan of photoetch to being with, so this was a very difficult task. In my humble opinion, the attachment points should have been plastic. You would get the same scale effect and something that would be much easier to assemble. Similarly, there is some rather thick photoetch that must be rolled into a cylinder and assembled around the large shock absorbers that are found on either side of the gun barrel.

The instructions ask for Russian Green. I usually use Tamiya paint, but I’ve yet to find a suitable shade of green that I like. For the gun, I chose Vallejo paints. The color was 70.894, Camouflage Olive Green. I need to thin it slightly, but I like the paint.

It is great to see Trumpeter put two kits together for the price of one. It was an enjoyable build. That being said, this kit is not for beginners. It takes a great deal of patience and time to make this kit look good. My only issues were with the photoetch. Regardless, Trumpeter continues to make a name for themselves in terms of not only the subjects they have turned into kits, but there engineering.

My thanks to IPMS, Megahobby, and Trumpeter for giving me the opportunity to review this kit.

Prime mover with limber and howitzer

Prime mover with limber and howitzer

Prime mover with limber
Previous Next