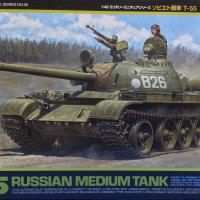 Tamiya breaks new ground with the first large production injection T-55 in 1/48 scale. Tamiya already has an impressive line of excellent 1/48 scale armor kits and this will likely prove to be one of their most popular offerings. This kit delivers everything we have come to expect from Tamiya; excellent detail, brilliant engineering and interesting subjects.

From the mid-1950s, the T-55 was the main tank of the Soviet Army, armies of the Warsaw Pact countries, and many others. T-55s have been involved in many of the world's armed conflicts since the later part of the 20th century. The T-55's first appearance in the West around the period of the 1950s (then the beginning of the Cold War) spurred the United Kingdom to develop a new tank gun, the Royal Ordnance L7, and the United States to develop the M60 Patton. The T-55 series remain in use by up to 50 other armies worldwide, some having received sophisticated retrofitting.

Detail: 4.5 out of 5
Tamiya has packed a lot of 1/35 scale level of detail into this 1/48 scale kit. The DShK heavy machine gun is really a gem. The grips are a little simplified, but easy to fix if desired. The cast turret has a wonderful in-scale texture that really pops when painted and weathered. Tamiya continues to up their game in the figure department with a tight little commander figure. The figure detail is good and he is in a nice, natural pose. The power supply lines to the infrared search lights are molded on to the turret, which is to be expected in this smaller scale. This is also easily fixed if so desired. Another very nice delicate detail is the brush guard over the bow headlight.

There are a few deletions that are unfortunate, but completely understandable given the smaller scale. Most T-55s have U shaped tie-downs on the turret. These are omitted in this kit. Another missed details, which is common to many T-55 kits, is the fuel lines on the external fuel tanks.

The only other very small issue was the lack of a radio antenna. There is a mount for one but no antenna.

Engineering: 5+ out of 5
We’ve come to take it for granted that Tamiya’s engineering is second to none. No surprises here. Tamiya has taken one more step away from the conventional tub hull construction with this kit, providing a flat-pack slab hull that comes in 4 main parts. Thankfully Tamiya seems to have completely abandoned the die-cast metal tub hull. They still do provide two metal weights to give the completed model some heft and seem less toy-like. The road wheels are comprised of two pieces and a poly cap.

The link and length tracks have faint ejector pin marks which are very easy to clean up. There are some other ejector marks and sprue gates in what I initially thought were inconvenient locations. After cleaning the parts up, however I found that Tamiya planned ahead and has those parts positioned on the finished kit so that their placement effectively hides the marred spots. Hats off to Mr. Tamiya’s engineer staff!

Fit: 5+ out of 5
There were absolutely no fit issues with this kit. Nada. The clever engineering, combined with the perfect fit of each part and assembly made this kit an absolute joy. It took me about two hours to complete all of the steps in the assembly portion, including the tracks, and I didn’t rush. The suspension and road wheels fit to such a tight tolerance that getting them all aligned straight (the great bugaboo with all tracked vehicle models) happened perfectly all on its own.

There are only two places on this kit where there are seams you will need to worry about. One is on the bore evacuator. The barrel is one piece, which is very nice, but the sleeve over the evacuator is two piece and while it fits like a dream, it still leaves seams on the top and bottom that need to be filled. The other seams are on the rear fuel tanks. This is one area on the kit that might cause some problems. The holding straps for the two-piece tanks are molded in such a way that there are seams to fill which are very difficult to get to. You will want a small file that can get into a 3mm space.

Instructions: 5 out of 5
Tamiya gives you their standard, well thought out, well-illustrated, multi-lingual instruction sheet. They go the extra mile with a nice data sheet that gives you some historical background on the T-55 in four different languages. There are 22 steps in the instructions but that’s only because they break it down to assembling only four or five parts in each step. It will be very difficult to get lost with these directions.

Markings: 2.5 out of 5
The decal sheet provided has markings for one unidentified vehicle which I can only assume is from a Soviet Army unit. The markings they chose looked typically Soviet Cold War, but with how widely the T-55 has seen service the world over, I was a very disappointed by the limited selection. Like I said above though, just wait a little while and we will see a flood of aftermarket options.

If this kit has a weak point it’s the decals. Waterslide decals seem to be Tamiya’s Achilles heel, which leaves me scratching my head since they have such high standards everywhere else. The decals have great color and are always in perfect register, but they are thick, thick, thick! Even if they nestle down over raised detail they obviously show as an adhesive mark from almost any angle. It’s very difficult to get that “painted on” look with Tamiya decals.

This kit put a great big smile on my face. For this guy who normally works in 1/35 scale, this was something new and fresh. It’s an interesting, good-looking subject and I can’t wait to see all the aftermarket options that are sure to come. I can’t recommend it highly enough.