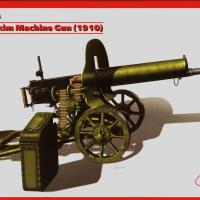 The parts are secured in a small plastic bag with two stickers applied. The first of those stickers matches the product number “35674”. The second sticker might represent the number of part sprues, “2”, or it might be an “inspector” number. Sprue “A” has 14 parts and Sprue “B” has 19 parts, with a total of 33 parts making up the machine gun and wheeled carriage. All parts are clearly marked with an I.D. number that is an alphanumeric combination. For example, the gunner’s seat is on sprue B and is part #16 on that sprue. On the kit instructions the gunner’s seat is identified as “B16”. This makes part identification very simple, very easy, and very clear.

Two options are presented for final display. One can assemble the model limbered up and ready for transport, or one can display the model in “firing mode”, on a tripod. A choice must be made as to how the final project will be displayed in Step 5. I had originally intended to display the model in its “transport mode”, guided by Steps 5b, 6b, 8b, and 9b. That plan was altered when one of the required parts was broken while attempting to remove it from the part tree.

Thinking it would be easier to simply change to Plan A (display the weapon in “firing mode”), I was guided by Steps 5a, 6a, 8a, and 9a. An additional change of plans was made when looking at the assembly sequence in 5a. This change required the alteration of the order in which the assembly steps were followed. The frames, A11 and A10, are to be attached by two rods, A4 and A5. Proper alignment is very difficult when relying on rods A4 and A5. It is better to jump to Step 6a and attach B19 to either A11 or A10, and after the glue has set, attach the A10/A11 part remaining. B19 provides much more contact area than rods A4 & A5 and that makes assembly much easier and far less frustrating.

A total of about 2 ½ to 3 hours was spent on this enjoyable project. The parts are well detailed, molded in scale, and the fit & alignment are quite good. The only issue I faced during this project was that due to the very small diameter of some of the parts, (the legs of the tripod and some supporting braces on the transporter), I managed to break several of those parts throughout the project. This is more of a criticism about my modeling skills than it is about the kit. With more care and thought the parts can be manipulated without damage being done to them.

An enjoyable and relatively quick project, the end result is that one can build up a very nicely detailed model of a Russian Maxim Machine Gun and pose it in either of two ways. As part of a diorama the item will certainly make a contribution to the overall scene, and as a stand-alone model it is interesting and well detailed.

Thanks to MMD Squadron for supplying this ICM kit to IPMS for review. The kit is highly recommended for those who are into “armor” and also those who want to branch out a bit and spend a short amount of time on a fun project.