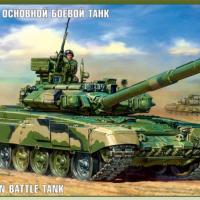 I will start this review by stating that I have little knowledge of the workings of modern main battle tanks, but I do find them “really cool looking” and so jumped at the chance to build this new offering from Zvezda of Russia. With the turret and main hull festooned with blocks of ERA (Explosive Reactive Armor), carrying a massive 125mm smooth bore main gun, and the turret looking like something from a Star Wars movie, these beasts are very menacing looking!!

The T-90 was originally envisaged as a stopgap tank, being developed by the Design Bureau of the Uralvagonzavod tank facility in Nizhni Tagil from the Soviet T-72BU. However, the designs which were slated to become the new MBT for the Soviet Armed Forces all suffered various problems, which were compounded as the Soviet Union disintegrated into political and economic chaos in the late 1980’s and early 1990’s. With the resulting new Russian state suffering from financial difficulties, cutbacks on military spending ensued, and the stopgap became the new Russian MBT.

Zvezda’s kit is the first injection plastic model of this vehicle in 1/35th scale, and as such has been eagerly anticipated by modern armor modelers. The kit consists of 7 sprues of injection plastic (6 in a light gray colored, soft plastic, a 7th in clear), plus a sheet of decals, a piece of string from which to fashion tow cables, and two sections of nylon mesh for the various engine screens. For those familiar with it, the gray plastic parts are very reminiscent of the plastic used by Airfix kits, being rather soft. It reacts well to my two favorite plastic cements, Tamiya Green Bottle liquid cement, and Testor’s Black Bottle (thicker) liquid cement.

There is a LOT of plastic in this kit; in fact, it is by far the most detailed and intricate armor kit yet produced by Zvezda, at just over 450 injection molded parts. And the detail on these parts is top notch. I encountered very few ejection pin marks that need dealing with, and only a couple of areas involving minor sink mark issues on the parts. Due to the nature of the soft plastic used, there was a reasonable amount of work required to remove mold seams, but nothing that would tax the patience of a seasoned modeler. Parts fit for the most part was exemplary, and where the odd fit problem did occur, it was simply a matter of test fitting, a little sanding, and then gluing the part into position. No putty was required with my model.

The first 18 sections of the instructions concern the assembly of the space-age turret and main gun. The gun is a two part unit, split down the center. Care is required in gluing together the two parts and making sure they line up properly. Once the glued barrel has fully set, extreme care must then be taken to insure the removal of the resulting seam line so as to keep the barrel round. The nylon mesh came into play in Section 20 and 22. Zvezda provides the modeler with templates for cutting out the mesh, and following these templates resulted in nicely fitting sections of material which were easily glued into place using super glue. In an ideal world, Zvezda would have provided PE screens here, and the more fastidious might wish to replace the nylon mesh with suitable PE mesh, or await the release of an aftermarket PE detailing set. I was perfectly happy with the nylon parts.

The lower hull section of the kit is very well detailed, and care as usual must be taken to make sure all the parts are in alignment so that the road wheels will sit correctly. The track parts were particularly well detailed, being of the link and length type. Each section of track is in two parts, consisting of separate pads/track and then a second part for the track teeth. This all results in the excellent rendition of the track detail. The tow cable string was perfectly useable, utilizing super glue to attach it to the tow shackles in Section 29a.

Once the model is assembled, the kit provides the modeler with two basic schemes of indeterminate units. One is a multi colored scheme, the other a simple one-color green scheme. I chose the latter as I am not very adept at free hand airbrushing. In terms of decals. the markings consist of various turret numbers and that’s about it.

In doing a little online research, I concluded that modern Russian tank green is roughly equivalent to FS 34079 Dark Green. I thus found a bottle of Model Master enamel paint in my supplies, which I lightened somewhat with Model Master British Gulf Armor Light Stone, which I also had in stock. Panel fade was achieved by adding more Light Stone to the Dark Green. All this was sealed with a coat of my favorite clear gloss, Tamiya X-22 acrylic gloss clear, suitably thinned with Mr Color Self Leveling (lacquer) thinner. The decals went on very well, utilizing Mr Color’s two part decal setting solution process. The decals were then sealed with more Tamiya X-22. I then applied some oil washes to help pick out the raised detail, and when fully cured, I followed up with a coat of Vallejo Modelair matt clear. I then applied some additional weathering via oil paint, threw on a few light dustings of Tamiya XF-57 Buff for road dust, and called it a day.

Zvezda’s new T-90 Russian MBT is without doubt their finest kit to date – hundreds of well detailed parts that go together without major effort, assembling into a very nice model without any hassles. If you enjoy building modern armor, then you really need to treat yourself to Zvezda’s latest masterpiece. You won’t be disappointed. My thanks to DragonUSA and IPMS-USA for providing me with the opportunity to review this excellent kit.