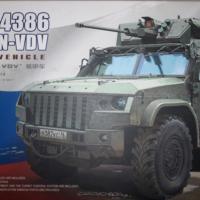 The Typhoon family of vehicles that have been in service since 2014. These vehicles serve a number of different functions and the main goal of the program is to provide a new united platform for all Russian armored wheeled vehicles. All of the vehicles in the Typhoon grouping have been designed as Mine-Resistant Ambush Protected armored vehicles. This new kit from Meng covers the newest member of this family, the K-4386 Typhoon-VDV. This vehicle was specifically designed to be dropped into war zones with the Russian Airborne Forces. It has been designed to be light, lightly armored and heavily armed for its size.

As usual with new Meng releases, the box includes an impressive collection of extremely well molded sprues with no visible mold issues or flash. There are five sprues in light grey colored styrene, a sprue of clear parts, four rubber tires, a ladder of poly-caps, four metal springs, a decal sheet, and separate parts for the lower hull/turret. There is ton of detail packed into the box and as usual with Meng kits there are no issues with the parts included.

The construction of this kit starts with the lower hull and suspension. I have no real issues with any of the fits in the first few steps. Just follow the instructions and everything falls together. In Step 2 I did leave the parts D69 and A10 off until after initial painting. This allowed me to keep the suspension more flexible for easier painting. I also left the parts for Step 3 off until after the initial painting. A12 and A13 I painted black and left off until final assembly. Part 25 can be installed at the end but the fit is really tight so be careful.

In Step 4 I left the mud flaps off until final assembly and in Step 5 I waited until final assembly to snap the shock absorbers on to the lower suspension. This left easier access for painting later. I assembled the wheels in Step 6 but left the tires off. These are quite possibly the best rubber tires that I have seen on a model kit. There was no noticeable mold seam, which is a first for 1/35 scale vehicles that I have built. I also left the wheels off in Step 7.

At Step 8 we start the construction of the interior. This kit contains almost a full interior for this vehicle, the one notable exception to this is the missing seat belts. The seat belts are very prominent and it would have been nice to see them represented. Steps 8 - 11 deal with the drivers position and I had no issues with any of these steps. The detail is extremely nice and the fits are great. I do want to highlight two color changes that I made, the first was for the seats, which I painted a 3:1 mix of Tamiya Olive Green and White. The second is for the dashboard/firewall, I chose to paint this XF-54. The kit does include some really nice decals for the prominent screens on the dash board.

After the front of the interior is complete the build moves to the passenger compartment. The only issue that I had here is that there are some ejection pin marks on the side walls of the passenger compartment. I chose to fill and sand them but realistically they are placed in such a way that they will not be visible though the windows and the packed interior. The only other issue that I had here was that the passenger seat attachment points can be a little fragile. I had one seat come out later in the build and it was not easy to get it back in.

The last part of the interior build is the control part of the remote turret. I had no fit issues with the parts for this in Step 13 and it fits well into the body of the vehicle. The parts have great detail and the kit includes more decals to dress up the screens here too. I did leave this part loose so that when I added the roof I could fine tune the fit.

Moving back to the exterior, I left Parts B4, B5, B9 and B12 off until after initial painting. There is a small seam from joining the upper and lower parts of the body. This was easier to address without these parts and it also made the painting easier. In Steps 17 and 15 the instructions have you add the clear parts. Before installing these I painted the inside of Parts E2 and E7 with Tamiya clear blue. These were glossed, masked and installed with no issue. In Step 16 I painted the interior equipment box Tamiya XF-54. For the interior of all the doors I used the same paint color.

I had no real issues with the parts in Step 18 but I did leave the detail parts from Steps 19 and 21 off until after initial painting. This made the painting much easier. Once the painting was done the fit of these parts were great. Also, I did leave the clear Part E6 off until after the final flat coat. Adding the subassemblies in Steps 20 and 22 revealed some very minor fit issues with the main body in both steps. But the issues were very minor and easy to correct with a little filler. In Step 23 I left Part D34 and the parts for the wind shield wipers off until final assembly. In Step 25 the kit has you install the upper body, I did this a bit earlier in my build but as I mentioned above there were some minor seams here that required filling.

I skipped most of Steps 26 and 27 until after final painting as most of the parts are easier to paint off the full build. In Steps 28 and 29 there are more windows that I treated the same way as above. I intended to leave the doors open to display the interior, so I didn’t attach them as required. Luckily the fit is tight enough to hold them in place for painting.

The last part of the construction of this kit is the turret. The turret is pretty simple and goes together very quickly. I had no fit issues with any of the major parts. The only tricky part is with the two cannons. The housings for both cannons fit around the barrels and need to painted prior to installing the cannons. In both cases I had seams to fill and sand on the out side parts of both cannon housings. This meant I had to be very careful to mask the pre-painted barrels. Also neither barrel is drilled out correctly, thankfully this was easy to correct with a small drill and pin vice. Once the barrels were installed in the housings they were set aside until after the final painting.

The instructions provide information and decals for two options: one for a vehicle at the Army 2017 International Forum in overall Russian Green and one in Russian Tri-color splinter camouflage. I chose the first option and painted it in overall Tamiya Olive Green. The kit instructions do provide a nice color guide, unfortunately like all recent Meng kits the only references are to Meng specific AK Interactive paints. After painting and gloss coating the kit adding the decals was next. There are a few very tiny decals on this kit and they all performed flawlessly over a gloss coat with a little Micro Sol.

After the painting and decaling was complete it was time to add all of the final details. I added the two antennas with no issue. The same can be said about most of the detail parts. The only issue that I had was with the subassembly for the wind shield wipers. The placement of this is little vague and this may be due to location pins that are a little too long. Mine had a slight gap in the back once I installed it and it interfered pretty badly with the right front lifting hook.

This is another great release from Meng. The engineering is up to their usual standards with no serious fit issues. This kit was surprisingly easy to build with the full interior and the detail is great. It was easy to build and more fun than I thought it was going to be. I would definitely recommend this kit to anyone that is interested in modern Russian vehicles or a fun build with a ton of detail.

My thanks to Meng Models and IPMS for giving me the opportunity to review this kit.