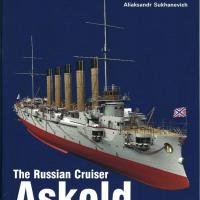 The Russian Cruiser Askold is one of the latest in their Super Drawings in 3D series. This edition is in their standard 8.25” x 11.75” format softbound publication that is 76 pages (including covers). This volume starts off with six pages of historical text followed by 64 pages of color 3D illustrations. As is sometimes available in other volumes of this series, there is a centerfold that folds out with line drawings. This line drawings features 1/200th Starboard, Top, and Port profiles of the Askold; 1/150th Starboard, Top, and Port profiles of the Central Superstructures; 1/100th drawings of the Conning Tower (five views) and Steam Boat (Starboard, Top, and Port); 1/50th drawings of the 6 inch Canet gun and the 3 inch Canet gun (ten views). There are no black and white period or color photographs. I did count 131 color 3D illustrations, 24 line drawings, and three tables.

The Askold was a unique protected cruiser, sporting five funnels, something no other Imperial Russian Navy ship featured. Named after a legendary 9th century Varangian prince of Kiev, she was launched on 15-Mar-1900 and commissioned on 25-Jan-1902. Askold started service in the Russian Baltic Fleet, but after one year was transferred to the Russian Pacific Fleet where she participated in the Russo-Japanese War. She saw WWI service starting off with Philippine patrols before moving to the Indian Ocean and then the Mediterranean. The fall of the Russian Empire led to the British Royal Navy seizing her where she was renamed the HMS Glory IV where she served as a depot ship. Upon the conclusion of the Russian Revolution, she was offered back to Russia for costs incurred, but Russia decided to scrap her 1922 due to her poor condition. The sections include:

Model-wise, Combrig has a resin kit in 1/350 with several photoetch sets available. Combrig and WSW Modelbau both manufacture a resin kit of the Askold in 1/700

I consider the Kagero Super Drawings in 3D an essential reference for model building. You get angles you can’t really see in other references and they are in full color. This being the eighty-fifth volume, they have managed to cover quite a few ships. You do get a history of the development and service of the Askold, but it would have been nice to have had more information. Nevertheless, the raison d’etre for the 3D series is the artwork, and that alone is worth the price of admission. If you have any of their previous books in the Super Drawings in 3D series, you know how great a value this book is. Highly Recommended!