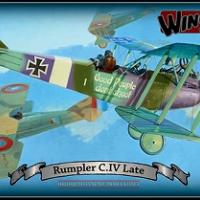 Having established themselves as the leading manufacturer of WWI aviation kits, Wingnut Wings continues their program of releasing quality kits of previously unavailable subjects in 1/32 scale. The Rumpler C. IV Late does not disappoint in the slightest, providing an intricate model that is a joy to build.

Boxed in their trademark sturdy box with beautiful box art by Steve Anderson, there are 12 sprues containing 255 parts (around 32 are not used). As with previous releases, the detail and molding quality are first rate and flash free. A small PE fret is included with parts to detail the machine guns and cockpit. There are also 3 huge decal sheets included for 5 different aircraft – 2 entire sheets of lozenge decals are worth noting because they are designed specifically to fit the wings instead of the strips of lozenge in previous releases. The full color instruction book is up to their usual standards, including clear assembly illustrations and reference photographs. For more information on the kit contents, visit their website; I wish more manufacturers would provide as detailed information and references about their kits as Wingnut Wings does.

The modeler is provided with several options based on which version is being built, including propellers, weapons, and observer’s position. There are also many accessories provided: cameras, bomblets, oxygen gear, ladders, flare guns, and even a small teddy bear (which is pictured tied to a strut in one of the reference pictures). Even though there are many detailed parts; this is not necessarily a ‘fiddly’ kit – everything fits and the assembly sequence is logical. For this review, I decided to build this kit strictly out of the box.

Assembly starts with the cockpit, which builds into an entire framed structure that slips easily into the fuselage. I followed all of the paint color call outs provided and quickly ended up with everything built up. A couple of nice touches were the instrument detail on the back of the front panel, as well as the positive attachment points that literally slide and snap together. Do not let paint build up on these areas – the tolerances are so small that too much paint will throw off how the parts fit. Fair warning: I am about to critique a Wingnut Wings kit. I know, I know…the humanity! The cameras are all split down the middle into 2 sides, not normally a problem except for the recessed space at the top for the film plates and numerous details on the sides that made addressing seams difficult. A 3-part camera would have made assembly easier.

I then moved on to the engine which, again, assembled quickly and easily. You will also need to assemble and place the Spandau machine gun at this point – I chose to use the provided brass cooling sleeve (and provided part for rolling it into shape) which I managed to mangle almost irreparably. Luckily, it didn’t look too bad and the damage was covered by the closed access panels on one side. Now, this is VERY IMPORTANT – your engine, when installed onto the frame, will sit crooked when viewed from the front. DO NOT straighten it out, thinking that you know best – you don’t. The engine was installed that way on the real aircraft to allow it to fit in the space allotted - a quick email to WNW confirmed this fact and left me to try to make it crooked again.

Once the interior is done, assembly moves pretty quickly. Different inserts are provided for specific versions, as well as other changes that need to be attended to, such as drilling out holes and scraping off some reinforcing strips. Nothing too complicated, as long as you read the directions.

The tail struts even have the saw tooth detail on the bottom – they were not there for airflow but to keep the ground crews from using the struts to move the aircraft! Before attaching the control horns, I drilled small holes in the tops so that I could thread the control wires through. The large top wing (this was a big aircraft) is a 3-piece affair and, when assembled, sets your dihedral perfectly. The lower wings have large mounting tabs that slide under the cockpit floor, which provides a very stable and secure base. At this point, I decided to leave off engine panels on one side to show off the engine detail. I also left off the radiator assembly until after the upper wing was attached to allow me to address any seams between the center strut and wing.

At this point, you can assemble and detail out the observer’s position, as there is quite a selection of flares to choose from, as well as a PE cooling sleeve. I am happy to say that the mangler was able to assemble this gun with no ill effects. I set these parts aside for final assembly.

Putting it all together

Painting was straightforward using all of the provided Tamiya mixes except for the light green color, which was PollyScale British Interior Green. I also used Tamiya smoke to do some post shading on the wings and fuselage. On the particular scheme that I chose, the ‘barber pole’ stripes on the struts are provided by decals which fit well and required only a bit of touch-up paint when completed. The leading edge striping is also provided in decal form, but I decided to paint mine on. All other decals reacted well with Micro Set and snuggled down nicely.

All of the wing struts are keyed at the bottom and solid at the top – there is no way to put the struts in the wrong place unless you are a particularly stubborn idiot. There is also little to no pre-drilling for rigging required, since there are also slots preset for that purpose. I did deepen a few spots, but that was all. The wings quickly snapped into place with a minimum of fuss – cementing from the center strut outward made certain that everything was bonded well and in alignment. The landing gear struts were likewise easily mounted.

At this point I added all of the mounting anchors for the turnbuckles (I use Bob’s Buckles to save what little modeling time that I have). Here is another IMPORTANT TIP – on page 12, the instructions note that turnbuckles are only present at the bottom wing. This actually made rigging much easier. There is also an addendum on their website – the rigging from the front middle strut to the cowling was missing from the rigging diagram in the instructions. Placement is provided on the addendum illustration on the website:http://www.wingnutwings.com/ww/product?productid=3053

I decided that I did not want to waste any of the lovely accessories, so I added some crates, fuel cans and a toolbox from my spares to create a little vignette. I used two Noch Wild Grass mats which I sprayed a dark yellow to give it that burnt grass look just like my lawn in July. Here is the product web page - the Noch product is easy to use and Scenic Express is an excellent supplier of these sorts of groundwork details.

This was my second WNW kit and it was as pleasurable to build as my first. The fidelity of detail and ease of assembly make any modeler look like a craftsman. There is something about the look of a WWI biplane – my wife and daughters, who rarely give my creations a second glance, really like how these turn out.

My thanks to Wingnut Wings for the review sample and to IPMS/USA for the opportunity!