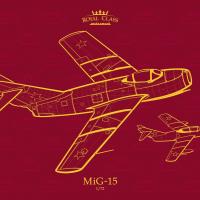 The MiG-15 turned out to be a nasty surprise for United Nations pilots when it first appeared in the skies over North Korea. While it and the F-86 Sabre shared many design features, they each had their strong points and weak points, that when used properly made them difficult adversaries. The MiG-15 became a symbol of Soviet prowess in the early 1950’s and was used by air forces all over the world, many of them serving into the 1980s or beyond. MiG-15s were not only built in the USSR, but also in Poland, Czechoslovakia and China.

The Quattro Combo includes four separate kits, a MiG-15, two MiG-15bis’s, and a MiG-15UTI along with markings for 18 different aircraft (2 MiG-15s, 9 MiG-15bis’s and 7 MiG-15UTIs). As has become standard with Eduard’s Royal Class kits it also includes resin extras (two ejection seats and two large conformal wing tanks), photo etch (3 single-seat sets and a two-seater set), masks for 3 single-seaters and 1 two-seater, a mounted piece of a real MiG-15 and a whisky glass with a MiG-15 motif on it.

I initially tried to construct all four kits together, but found myself getting mixed up with the single-seaters as there are some distinct differences. When I found myself trying to glue a MiG-15 left fuselage to a MiG-15bis right fuselage, I decided it was time to slow down and construct one kit at a time! In hindsight, I also discovered that I had made a couple of errors when I constructed the MiG-15 as I discovered at the masking stage that I had used the wrong intake splitter and I forgot to open up the drop tank mounting holes. The MiG-15 uses the clear plastic splitter piece as it has its landing light located in the upper portion of the splitter, while the MiG-15bis has the landing light mounted under the left wing. My error became apparent when I went to mask off the MiG-15’s landing light and discovered I had used the grey plastic part instead of the clear part. Please note that the masking instructions on page 20 of the instructions incorrectly tell you to mask off the clear splitter piece (part A9) on the MiG-15bis instead of on the MiG-15.

The cockpits go together very well and the only time consuming task is installation of the photo-etch instrument panels, side consoles and sidewall details, but they really add a lot to the finished cockpit. As the kit only includes 2 resin sets, you will need to decide where to use them. I put one in the MiG-15 and the other in a MiG-15bis. They add some nice detail, but the kit seats are also very nice when the etched belts are added. The pour stub for the resin seat is on the bottom of the seat, and since the seat bottom has a semi-circular recess it fits into in the cockpit, you will need to round off the bottom of the seat to get it to fit. Once the cockpit assembly is dry, take some time and dry fit the fuselage halves, the nose ring and the lower gun tray together as this will show you where you can stash weight to prevent a tail sitter. When assembling the fuselage, I recommend using glue that gives you a little working time before it sets up because due to the number of pieces that have to come together to make up the nose section of the single-seat kits, if the glue sets up too quickly, you will end up with gaps or uneven seams that will require remedial sanding and filling to smooth out. As shown in the photos, each time I assembled a MiG, I ended up with a bit of a seam to address and none of them were the same.

Before assembling the wings, you will need to decide what, if anything, you want to hang under the wings. The plastic trees provide three types of drop tanks, a small slipper tank that fits on the leading edge of the wing, and two normal tanks with different pylon attachments. The Royal Class kit also includes a set of larger resin slipper tanks. The resin tanks have a slightly raised seam line on the top and bottom of the tank, but in researching this, I discovered that the actual tank does too. The sprues also include bomb pylons and small bombs if you opt for a fighter bomber configuration. The decision of what to hang under the wings will determine which holes you need to open up in the lower wing halves, fortunately, there are unused lower wings on each sprue that you can use after the fact to locate and drill your holes if you forget!

The rest of construction went very well and after a bit of sanding, polishing and priming, I was ready to commit to painting. As I mentioned above, the kit includes markings for 18 different MiG-15s, so most modelers should have no problem picking out which ones they want to do. Unfortunately, I am not a fan of natural metal painting, mainly because I don’t have the patience to do it often enough, however as 15 of the 18 paint schemes are at least partially if not completely silver, I had to face my demon and just do it. Fortunately, the MiG-15s was normally painted aluminum overall, not left natural metal, so I used Tamiya Aluminum on the MiG-15 and the MiG-15bis. To my content, 3 of the 5 MiG-15UTIs were camouflaged, so I had something to more my liking. I suspect that given the MiG-15’s long life, aftermarket decals will be forthcoming to provide modelers with of color scheme options. Decaling turned out to be a fairly easy affair as while the decal sheet includes a lot of decals, none of them are stencils, so most of the options only require a half dozen or so decals to be applied.

I thoroughly enjoyed this kit and I now have a nice trio of MiG-15s in my display case along with the piece of an actual MiG-15! I am holding the second MiG-15bis in the paint shop while I find a paint scheme other than silver, so I suspect it will end up in some sort of camouflage scheme with bombs hanging off it. I highly recommend this kit to anyone with an interest in early Soviet aircraft and no aversion to natural metal/aluminum paint schemes.