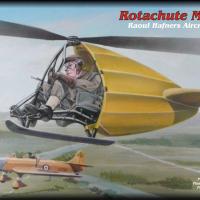 “The design of the man-carrying machine known as a Rotachute, also known as a Hafner H.8, evolved from November 1940 and throughout 1941. In September 1941, the Central Landing Establishment was renamed the Airborne Forces Establishment. The Rotachute Mark I design initially comprised a tubular steel framework with a single-seat, rubber-mounted rotor hub, hanging control column, skid undercarriage, and a self-inflating rear fairing made of rubberized fabric with integral tailplane. The two rotor blades, of wooden construction, could achieve flapping and coning characteristics via hinges on the rotor hub. Fixed footrests were provided, plus fittings below the seat to accommodate a soldier's weapon, such as a Bren gun. The control column offered two-axis control, rolling and pitching, with turns made via controlled rolling movement.”

The Rotachute was designed to offset a silk shortage that limited the production of conventional parachutes. By the way, Wikipedia goes on to note that the first test pilot was awarded the UK Air Force Cross, In my mind, he should have received the medal for even strapping into this thing.

I’m a sucker for one-off prototypes and weird and unusual aircraft, so this simple kit from Fly, a Czech manufacturer of unusual subjects, caught my attention. It’s a multi-media kit (injection-molded and photoetch, with a resin Bren gun included).

Construction is relatively straightforward, except for the fumble-fingered amongst us. Much of the structure consists of finely molded parts that are susceptible to breakage. I ended up replacing a few components with scratch-built versions. Most notable among these is the horse-collar shaped control column. I tried to wind monofilament thread around it to replicate the cord grip at the base, but the original part didn’t survive – my replacement is made of aluminum wire wound with fine solder. I also added a solder frame around the entire front of the shell; in retrospect, this was too much work with too little results.

I painted the shell with Tru-Color Doped Linen – various photos of versions of the Rotachute (there were 10 Marks in total) show yellow as the shell color, but the box art suggested a natural linen finish. The framework is done in Vallejo black, and the seat structure and harnesses in various shades of Umber and Brown, with the buckles and fittings, picked out in steel.

I scratch built a sawhorse out of balsa wood to have something to prop the finished model on, and glued everything to a simple base. And, although there were no markings included in the kit, I chose to add RAF roundels to each side of the shell just to add some interest.

This kit is recommended to modelers who want to add something out of the ordinary to their collection. Thanks to Fly Models, who are great supporters of the IPMS/USA Review Team!